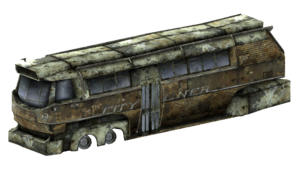 City Liner was the name given by the D.C. Metro Service Bureau to a public bus network. This network covered most of Washington, D.C. and the surrounding communities in Maryland and Virginia.

Each bus in the fleet was powered by a nuclear engine with exhaust vents in the front and in the rear. Access panels, located on the outside of the bus and just beneath the driver, were used by mechanics for accessing critical components of the bus. On either side of the bus, there were double folding doors with a handrail for the entering and exiting of passengers. On the front of the bus, a digital display gave directions on where the bus was heading. Inside the bus, passengers would sit on benches, while the driver sat up front on a raised podium. Advertisements were placed above the windows in the passenger compartment. Each bus had identifying marks. The marks on one bus read: "DC L 25601" and "406".

All buses in the game have the same identifying marks as only one model of the bus was ever made and then copied repeatedly. As to features, it is not clear what the two projections, located on either side of the bus's front and above the driver, were meant for. These are most visible from the top of the bus. One can get to the top of a bus by simply doing a series of small jumps starting from one of the rearward projections which has the words "No Step" labeled on it.

A typical bus stop for the City Liner network was a canopy-type structure that may or may not have a bench and/or a garbage can. Sometimes there were two or more bus stops in the same location. For example, Fairfax Ruins had four of these stops. Bus stops were located:

Though one can assume that a map would exist showing the different bus routes, none was ever present in the game.