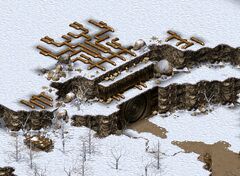 Entrance to the Vault

Cheyenne Mountain is a location in Fallout Tactics, which can be reached from Bunker Epsilon.

During the 20th century, the American military created a facility underneath Cheyenne Mountain, one mountain in a range of many on the western side of the United States. These ranges extended from Canada, far to the north past the United States border, down into the southeast of the country. Vault 0 is located here, housing the Calculator.

Before the Great War, Cheyenne Mountain Operations Center was host to four commands: North American Aerospace Defense Command (NORAD), United States Northern Command (USNORTHCOM), United States Strategic Command (USSACCOM), and Air Force Space Command (AFSPC). Throughout the Cold War, Cheyenne Mountain was considered a primary target in all first-strike and second-strike scenarios. Although the mountain was designed to withstand multiple direct hits from nuclear weapons, projections were universally pessimistic as to the survival of the installation.

Vault 0 (Vault Zero), unlike most vaults involved in the vault experiments, was not an experiment in human behavior. It was constructed by expanding and reinforcing the Cheyenne Mountain Complex in Colorado and was by far the largest of the underground vaults (by volume). Many of the areas that comprise the massive interior layout of Vault 0 were originally designed to be the size of (and were often compared to) aircraft hangars, warehouses, and factories; these zones were for the construction of various machines that were ostensibly designed to serve the vault dwellers.

A massive amount of war robots and a cybernetic computer to control them (and serve as the vault's overseer) were placed here to ensure humanity's rebirth after the nuclear war. However, the Calculator becomes corrupted, drives the population of the vault to extinction, and initiates the pacification protocol, originally intended to kill all of the possible enemies to the people of Vault 0.

A massive army of robots emerges, producing more and more every day using several pre-War manufacturing centers such as Great Bend and Canyon City. The internal power supply of Vault 0 was not enough however and the Calculator had to use the nuclear reactors of Buena Vista to help power its growing robot war machine. Soon the Calculator became the main enemy of the Brotherhood of Steel. The Warrior, hero and general of the Brotherhood, led his squad to confront the Calculator, defeating the robots, which guards their main base. "Plutonius," a nuclear warhead from Kansas City, was placed on the nuke carrier, brought closer to the vault entrance and eventually blew up the entrance. The Warrior and his squad managed to survive the explosion thanks to a nearby fallout shelter (a small military bunker). Soon, the final battle begins.

By 2253, a huge section of the mountains became a great radioactive smoking crater, giving birth to a large population of glowing ghouls. Coupled with attacks on Denver and the Rocky Mountain Arsenal, Boulder became the center of a triangle of hellish death.

Although Cheyenne Mountain isn't mentioned in Fallout 2, NORAD is. Listed as a footnote, buried in the network script of the Gecko Power Plant computer terminal. NORAD is listed as "offline."

Cheyenne Mountain appears only in Fallout Tactics and is mentioned in Van Buren.