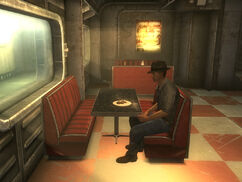 “There's too much shit and despair at Gomorrah already. I don't want anybody making it worse for Jo... for the girls, you know?”— Carlitos

Bye Bye Love is a side quest in Fallout: New Vegas.

NOTE: There is no way to get this quest without passing at least a 50 Speech check (with Carlitos) or a 50 Medicine check (with Joana).

The quest can be triggered by speaking to Joana or Carlitos, who reside in the Gomorrah Casino and Hotel (in the courtyard) and the Vault 21 hotel (in the mess hall), respectively. To activate the quest with Joana, pass a Medicine (50) or Speech (75) check to initiate dialogue that will eventually have Joana talk about Cachino and Carlitos. She will offer 200 caps or sexual services for taking the quest (the second option is only available if the player character is male, or a female with the Cherchez La Femme perk). If one cannot meet either check, they can talk to Carlitos, who only needs a Speech (50) to find out about why he left the Omertas and Joana. Carlitos will give the player character 200 caps upon accepting the offer to help him and another 200 upon completion.

The first part of the quest involves ferrying messages between Carlitos and Joana. After some running back and forth, the Courier can agree to help Joana and two of her fellow prostitutes escape to Freeside to join Carlitos; the agreement being to wait until between 12AM and dawn, Gomorrah's busiest hours, before attempting the escape. Carlitos advises the Courier to get some backup before attempting the escape, as Carlitos knows two guns-for-hire that owe him a favor. This gives the Courier the option to recruit Big Beard and Little Beard, who are located in the Atomic Wrangler Casino. Once the Courier is ready, they need only speak to Joana, who will then change outfits and walk to the casino floor where the other two prostitutes are waiting. Talking to Joana once she arrives causes all three to run to the meeting point in Freeside, which is down the first side street outside the Strip gate.

Once the player character meets up with the hired guns and Carlitos, four Omerta thugs will ambush the group. Either go into combat with them, or talk them into leaving with one of three checks: Strength (8, 9), Speech (75, 85) or Barter (85 with 500 or 75 with 1000 caps). Carlitos and Joana must survive the confrontation, otherwise the quest will fail. If successful, Carlitos will thank the Courier and ask if there is a way to repay the kindness. From here, there is a choice between receiving 200 caps or accepting a simple "thank you" for good karma. Alternatively, if the Courier talked to Carlitos first and they have a high enough Barter skill (65), they can get another 400 caps on top of the 200 at the start.

From here Joana will thank the Courier and mention a sinister plot she's heard about from Cachino about the Omertas. The How Little We Know quest will initiate if it has not already been activated.