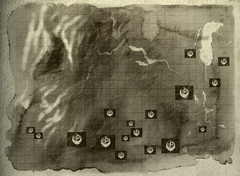 A map of the Brotherhood's outposts and bases across the Midwest at the conclusion of the campaign against the Calculator
...

After the defeat of the Master, the original Brotherhood found themselves at odds with their need for new blood versus their code of technological secrecy. The debate went lightly. Finally, the elders ruled against sharing the technology with outsiders, convinced that they would endure what they had before. Further discussion was discouraged when the elders ordered the minority who wished to share their technology on a mission across the wastes. The Brotherhood constructed airships and dispatched the minority East, to track down and assess the extent of the remaining super mutant threat. However, as they traveled over the great mountains, a great storm broke the main airship and flung it far from its course. The mighty airship was badly damaged, the smaller sections torn from the main craft, never to be seen again. Many of the expedition leaders, including Paladin Latham, were lost to the winds. The fraction of the crew that still survived struggled to keep their ship aloft before finally crashing on the outskirts of the ruins of Chicago. Survivors eventually formed a new organization, which diverged greatly from the ideals of the old Brotherhood. In time, they established a harsh rule over the towns and villages in that area.

After long fights with countless raider bands, a warlike technological cult known as the Reavers, and a super mutant army led by mad Paladin Latham, in 2198, the Brotherhood eventually faced their greatest enemy – a robotic army commanded by the Calculator, the mad cyborg of Vault 0 in Colorado. Eventually, the robotic army was defeated and the Calculator was either destroyed or merged with a new mind, that of the Warrior or that of Simon Barnaky.

As of 2277, the fate of the splinter faction is unclear. They differ from the rest of the Brotherhood in that they are willing to accept non-humans into their ranks. During the war with the Calculator, the Midwestern Brotherhood's forces consisted of survivors from the expedition, human recruits from tribes and towns, ghouls, sapient (hairy) deathclaws, some super mutants (many recruits came from defeated enemy forces), and machine legions from Vault 0.

It is said that in the Brotherhood of Steel symbol, the gears represent their engineering knowledge, the sword is their will to defend themselves, the wings are the uplifting hope, and the circle is the wholeness that makes it a Brotherhood.

The Midwestern Brotherhood of Steel operations base on small, versatile squads deployed to engage the enemy. They rarely hold more than ten brothers. A rough listing of the most notable, named squads follows (player's six-person squad excluded):

The Midwestern Brotherhood of Steel appears as the main faction and player's affiliation in Fallout Tactics.

In Fallout 3, Scribe Reginald Rothchild makes a mention about a small detachment of Brotherhood in Chicago that have fallen off the radar and gone rogue. The only known group of Brotherhood that has operated in and around Chicago is the Midwestern Brotherhood of Steel.

In Fallout 4, the airship accident is mentioned when asking Lancer Captain Kells about the Prydwen's history and design.

The Midwestern Brotherhood of Steel are mentioned in Fallout: Wasteland Warfare.

The Midwestern Brotherhood of Steel were also to appear in the canceled Fallout Tactics 2 and Fallout Extreme.

This article is based mostly on the description of the Midwestern Brotherhood of Steel from Chris Taylor's Fallout: Warfare background and the intro.