Bobblehead - Unarmed is a Fallout 3 item, a Vault Boy Bobblehead. It permanently improves your character's Unarmed skill by 10, to a maximum of 100.

Head directly west from Smith Casey's Garage, look for tattered black banners (colored on Xbox 360 confirmed) strung up on a rock wall in a forked valley area, click on the rock wall behind the black banners. The Bobblehead itself is found on the ground next to a dead Ghoul. The cave is actually Rockopolis, notably mentioned in the tales of Herbert "Daring" Dashwood, and the dead Ghoul is his manservant, Argyle. 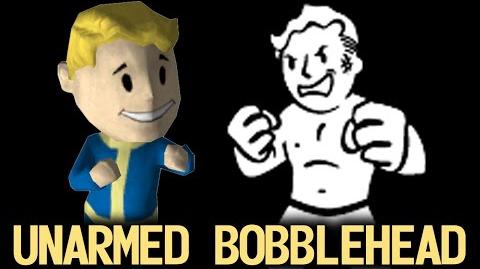