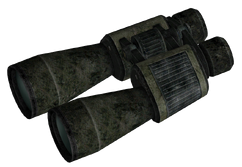 Binoculars are classified as a weapon in Fallout: New Vegas.

Binoculars are equipped and holstered like a weapon, but cannot be used offensively. When drawn, using the same zoom function found on scoped weapons will allow the player character to look through them.

Binoculars have a magnification of 2.43. Due to their low magnification, it is generally preferable to use a scoped weapon, if available, as they can have magnifications of up to 3.5 and allow for immediate engagement of any spotted targets. 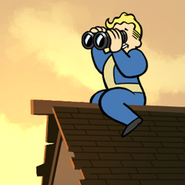