The auto-cannon is an automated defense system that appears in Fallout 2 in New California in the year of 2241.

The auto-cannon is an autonomous defense turret equipped with twin minigun cannons and relatively heavily armored. They are usually part of an automated defense system. Despite their fearsome armaments, someone loaded up on Psycho can survive longer ranged attacks.

Auto-cannons are indeed fearsome adversaries, and are ever-watchful of their domain. Their dual miniguns spell doom for unwary player characters - especially those with low levels DT. There is hope, however, as auto-cannons are vulnerable - just like most other robots - to electro-magnetic pulses. 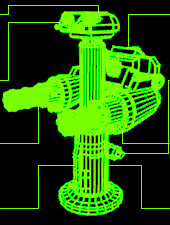