The atomic pulverizer is an energy weapon of alien origin that is added to Fallout 3 in the Mothership Zeta add-on. It is the unique version of the alien atomizer.

The atomic pulverizer only deals 2 more points of damage in a shot than the alien atomizer, but has a very low AP cost of just 12 points. This puts it at the second lowest AP cost, tied with the ritual knife, and just 2 points above the toy knife. It has the same dead-on accuracy and long range of the atomizer, but lacks the raw power of a disintegrator.

The low AP cost combined with Concentrated Fire and Grim Reaper's Sprint can make this weapon very effective for quickly defeating groups of enemies when using V.A.T.S.. One downside is that this is likely the fastest way you can use up alien power modules.

The atomic pulverizer can fire a total of about 676 times, the equivalent of 34 reloads, from full condition before breaking.

It is located in the weapons lab after beaming up from the space walk section and proceeding through the observation deck. It can be found in a small room located in a hallway near the entrance. The room can only be accessed by using an alien door terminal that requires 75 Science to activate. The terminal is explosive so when killing the enemies don't destroy it. The pulverizer will be found lying on a rack directly to the right after entering the door.

Other notable loot inside the same room include an offline guardian drone, a Buttercup toy, some alien power cells, another atomizer, and other forms of alien memorabilia. The official guide states that two atomic pulverizers are on the shelf, this is in fact true but with no explanation as to why there are two.

Atomic pulverizer on a shelf in the weapons lab 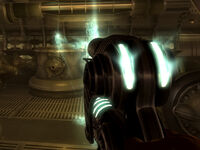 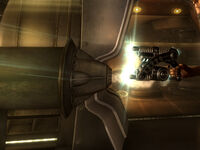