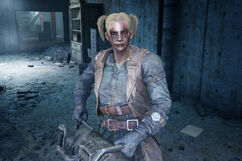 Ack-Ack is a raider in the Commonwealth in 2287.

Ack-Ack is a named raider located inside of USAF Satellite Station Olivia. Her group of raiders is responsible for forcing the settlers of Abernathy farm to supply them with food. During one such occasion, one of the Abernathy daughters, Mary, tried to stand up to them and was killed. The raiders also took a locket from Mary, and the Sole Survivor will encounter Ack-Ack when they arrive to retrieve it in the quest Returning the Favor.

Ack-Ack appears only in Fallout 4.

Ack-Ack is a slang word for anti-aircraft. "Ack-Ack" came from the German Flak 88 anti-aircraft gun. The German word for eight is "acht." Acht-acht became ack-ack in English.