“The Vault’s door rolled open exactly one year after the bombs fell. Those who had been living safely within its confines found the Wasteland, and groups of other survivors on the outside, to be less than welcoming of their arrival. Vault 94 remains, though its inhabitants are long gone, and it has been completely overrun by nature. Yet, something within now threatens its destruction.”— Inside The Vault, Fallout 76

Vault 94 is a Vault-Tec vault located on the border of the Savage Divide and the Mire regions of Appalachia in 2102.

After the release of Nuclear Winter patch 1.2.2.9, the player character is able to visit Vault 94 during vault raids, in groups of 1-4. It will be closed again for an indefinite amount of time with the release of Wastelanders.

As per its mission, Vault 94 was tailored to the needs of a congregation and to respect the values and beliefs of a religious intentional community: 安東尼奧·薩拉瓦 suggested his ex-wife, religious leader Gabriella Salavar, and her congregation to take residence in the vault. 避難所內所有的成員均來自她的宗教團體(the tenet of faith)，和避難所科技相關的人只有一個避難所工程師泰隆·海斯。避難所沒有配備任何武器、砲塔、和保安措施，while all robots were locked to a nonviolent conflict resolution mode (non-violence), living quarters were clustered to create communal residential spaces instead of individual residences with a community council model of government established to encourage dialogue and consensus-building among residents (communal life), and extensive agricultural facilities for the benefit of the community and any other survivors of a nuclear apocalypse (ecological harmony).[1] 避難所沒有監管人，監管人的職位由居民委員會代替, though Gabriella acted as its de facto leader. The council was encouraged to operate by consensus, and consensus was presumed unless otherwise indicated. Motions related to vault security would require a formal vote, which was conducted by swiping Vault ID cards in the card readers located in the council chamber.[2]

Most importantly, Vault-Tec assumed that in the event of global nuclear war, multiple mass extinction events would happen. The primary mission of Vault 94 was to monitor and stabilize the local ecosystem, and to assist survivors outside the vault (if any) with their agricultural needs. Vault 94 was equipped with a complete agricultural research facility on top of its hydroponic facilities, including experimental greenhouses, aquaculture labs and a comprehensive seed bank containing all known plants suitable for edible or medicinal use. To prevent damage to the seed bank, 避難所只要偵測到輻射程度嚴重時會自動關門。避難所只計劃封閉1年。Finally, 94號避難所was selected to配備伊甸園創造工具。 In the event of catastrophic environmental devastation, the G.E.C.K. was thought to be the best hope for the survival of humanity. As a security precaution, and to prevent premature use or misuse, the G.E.C.K. was sealed in a self-contained secure wing of the vault. Access to the G.E.C.K. wing required special authorization from the Vault 94 community council.[3]

Two days before the Great War, Vault-Tec issued new orders for the staff maintaining the vault, with most of the staff wrapping up their assignments and returning to Vault-Tec University. Tyrone Hayes was instructed to stay behind as the only Vault-Tec employee, to maintain the vault and remain in touch with the invited residents, Pastor Salavar and her congregation, in case of nuclear war.[4] He did as instructed. When the Great War came, he even deliberately stalled the door to allow a second bus of residents to arrive and find safety inside the vault.[5]

What they did not realize was that Vault-Tec was absolutely not the benefactor they thought it to be. Vault 94 was a social experiment like most other vaults, and 泰隆海斯是避難所的秘密監管人。Vault 94 was designed to 觀察ideological團體在changing social contexts情況下的應變能力。The pastor's congregation was an agrarian pacifist religious community, expected to reinforce that identity during the one-year shelter period, enjoying Vault 94's high-value resources and no lethal tools of any kind. By encouraging contact with the outside in both the mission outline and through Hayes, Vault-Tec hoped to observe how the residents would modify their belief system, improvise and adapt quickly in order to ensure their survival against armed, hostile people outside. 泰隆·海斯under cover as避難所工程師，裡面唯一避難所科技相關的人，負責minimize disruptions to their social order and不能對避難所高層的決策有任何干擾。He was to observe the ensuing conflicts and report findings using the secure channel provided.[6][7] While the congregation took to life in the vault well, Hayes did not. He stalled the door as best he could, but it sealed, leaving the second bus of prospective dwellers pounding on the massive door. That experience, listening to their cries and pleas, broke something inside Hayes. 他instantly後悔當時錄取了避科大。By November, he started adjusting, but remained 局外人。The congregation got along well, despite the shock of the nuclear war. Only薩瓦拉牧師還是很不爽泰隆海斯把當初讓其他人鎖在外頭。[8] The distrust lasted well into the new year, especially when 海斯和牧師的女兒安潔莉卡感情越來越好後。[9] When they finally 訂婚in August 2078，安潔莉卡的母親仍無法接受。[10]

在接近避難所結束封閉時, Hayes became convinced that he needed to protect the vault from his former masters' plans, especially as 牧師的大使計畫：派人去外面尋找生還者並邀請他們進入避難所。Despite 海斯完全反對這件事情, they refused to listen. Vault-Tec expected them to fight to survive and Hayes knew, as he was one of them by then, that they wouldn't do it under any circumstances.[11] During the October 16 meeting, a week before the end of the mandatory shelter period, Hayes took to the council floor and came clean, 他透露了避難所科技交給他的任務並讓他們看了他的指令。 He sacrificed everything, his relationship with Angelique, his standing with the community, 但仍然無法阻止大使計畫。[12] The vault reopened on the first anniversary of the Great War, with ambassadors sent out after a short prayer for the victims of war. The dwellers prepared for the first visitors and even set up an experimental garden outside to see which crops, if any, could be reintroduced to the post-nuclear world.[13] Everything was safe and secure for nearly a month as the vault waited for the first ambassadors to return. Hayes remained fearful of what would happen, while the entire community remained convinced that whoever was left out finally understood the futility of war, and was ready to listen, to live in peace.[14]

Hayes was eventually proven right. Many of the vault ambassadors found a grisly end at the hands of the raiders of Pleasant Valley Ski Resort, tortured to death or outright killed, then propped up as decorations.[15] The ambassadors who did return didn't bring anything better: A group of survivors from Harpers Ferry, dispatched by its mayor to verify the ambassador's claims, believed the message of peace was a trap for something more nefarious and massacred the residents. After killing everyone, including the pastor and Hayes, they 最後發現了伊甸園創造工具in the secure wing.[16] Already spooked by the dwellers' apparent docility, 他們認為這是一個可以把人洗腦的宗教器材，而這裡的居民就是受到裝置影響才變這樣。 The leader ordered his men to shoot up the G.E.C.K., resulting in a Level-6 nuclear event and radiation surge measured at 7,800 Rad/s. The resulting blast wave created the Mire almost instantly.[17] The explosion could be felt for miles around and preceded a mysterious fog that came rolling down the eastern slopes of the Appalachians, twisting the flora and fauna as it came into contact with them. Ella Ames, the Free States' resident scientist, couldn't even begin to theorize what effect the G.E.C.K. could have on an environment when "improperly utilized," which soon became clear with the Mire's creation.[18]

他們直接用旋轉機槍炸毀了伊甸園創造工具，但是這直接導致Level-6 nuclear event and大量的輻射at 7,800 Rad/s. The resulting blast wave 造就了現今的幽暗沼澤almost instantly.[19] The explosion could be felt for miles around and preceded a mysterious fog that came rolling down the eastern slopes of the Appalachians, twisting the flora and fauna as it came into contact with them. Ella Ames, the Free States' resident scientist, couldn't even begin to theorize what effect it could have on an environment when "improperly utilized." The Mire was only too happy to demonstrate.[20]

By 2102, the Vault 94 door was still sealed. Entrance required a vault access code, which only Vault ambassadors carried. The corpses of many of the Vault ambassadors are scattered across Appalachia, however none of them still seem to be carrying their access codes. However, the residents of Vault 76 later accessed the vault as "Vault-Tec maintenance engineers."

Vault 63, 96 and 94 are associated with vault raids, team quests where there is an emergency in the vault that must be fixed. Player characters are notified through an emergency radio beacon. These are instanced dungeons, where groups of 1-4 can enter and attempt to complete the raid for the chance at unique rewards.

The exterior of the vault features a small experimental garden that had been set up by Vault 94 resident Maria Collins to test what crops could still grow in the post-War environment. There is a shallow pool of water near the garden, along with some derelict vehicles, shacks and crates. A cave leads into the Vault 94 entrance. There is a waist deep pool of water in the cave, which is covered from wall to wall with mutated vegetation endemic to the Mire.

The corpses of 12 unnamed Vault dwellers wearing Vault 94 jumpsuits can be found scattered throughout Appalachia. These are the corpses of the Ambassadors that had been sent out by Gabriella Salavar.

The first room, with the mission terminals in the corner

The door from the inside 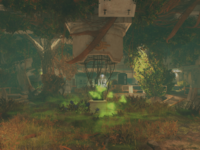 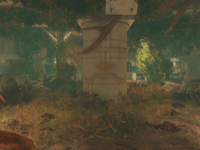 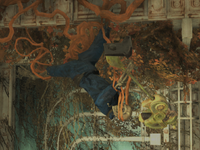 Prior to Nuclear Winter

The entrance to Vault 94's cave

Another view of the entrance

The cave and control terminal, with Vault 94's door shrouded in vegetation in the background