Vault 76 is a Vault-Tec vault located in the Forest region of Appalachia in 2102. It is located north of Flatwoods, West Virginia, (mislabeled as a D.C. area vault in certain Vault-Tec records)[1] and was designated as the "Official Vault of the Tricentennial" by Vault-Tec, under the tagline "Vault-Tec Salutes America."[2]

Vault 76 is the game's starting and tutorial area, providing a direct route to the exit with few branches. The player character awakes in their apartment and has the opportunity to explore their surroundings and collect the Nuka Tapper game holotape from their personal terminal. They are only allowed to exit the apartment once they collect the Pip-Boy 2000 Mark VI, entering the atrium area with traces of the last day's party. The atrium is large, complete with tables, a diner and a soccer pitch in the middle of the vault. There is a note that cannot be taken sitting on one of the tables in the diner on the upper level of the atrium, called the love note. The upstairs levels of the atrium contain accommodation for the residents, complete with beds and color TVs.

Several Mister Handies are positioned throughout the vault on the route to the exit and man stations at which the player character can acquire their C.A.M.P. and a few other basic necessities as they prepare to leave. The aforementioned standees are found on the way out of the vault and provide some basic tips on survival, together with slowly-repeated instructions from the Mister Handies. More importantly, each standee offers the player character the chance to collect some gear, including:

As the vault is in the process of shutting down, side routes are sealed off and inaccessible. However, the player character can access a few areas and terminals, including the personnel files (in the room with the projector and perk pack) and the security office just by the entrance. The overseer's office is also accessible via going slightly off route while following the trail of equipment stations. Once the resident exits the vault, the game starts.

To ensure that all residents leave the vault, the vault's main systems, including life support, were to be shut down shortly after Reclamation Day. Unlike other vaults that have a security checkpoint, blast door and elevator to head deeper into the vault, Vault 76 has its blast door level with many of the vault's more critical rooms. After leaving Vault 76, no one can return into it, however, new characters created will always start in the vault.

Vault 76 is one of the many locations that cannot be nuked in the quest I Am Become Death.

A ceremony held outside the vault honoring its debut

The vault's exit zone (with the door open)

View outside of the vault 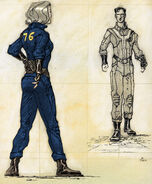 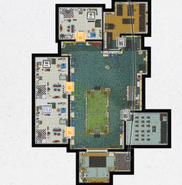 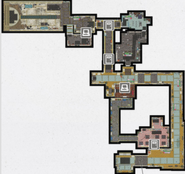