Vault door, before being "caved in"

“Well, I earned my rank from fightin' in that war. But my men... well, someone had to step up. To me, a real leader is someone who steps up in a crisis and takes control of a situation, whether they were chosen or not.”— Robert Baker

Vault 51 is a Vault-Tec Vault located in the Forest region of Appalachia. It was the focal point of the Nuclear Winter game mode in Fallout 76 until its discontinuation on September 8, 2021. The location is open for exploration in all game modes as of the release of Fallout Worlds.[1]

Vault 51 was sealed shut during the Great War in 2077. Twenty-five years later in 2102, the vault remains sealed.

Unlike most other vaults, 51号避难所最开始是没有监管人的。A ZAX supercomputer, ZAX 1.3c, was installed in the facility, 目的是让ZAX不断地学习来获取找到领导者的最好办法。51号避难所一共有52个居民, one of which, 贝克中士，was let into the vault early and was assigned as ZAX的引导者, 教導他如何選拔一個監管人。貝克中士提議用投票的方式，而ZAX認為可以在第一次實驗中這麼做，though Baker had reservations。[2]

In addition, the failed elections created feelings of hostility and factionalism within the vault. 2078年1月監管人選拔持續了第三次，仍然還沒有任何進展，brawls began to break out between supporters of 克里斯、喬爾、弗蘭希斯、凡妮莎.[5] To make matters worse, ZAX开始秘密地挑拨离间避难所居民 and devise social experiment to bring about the crises that Baker mentioned. One test involved moving higher-class citizens into uncomfortably cramped living conditions with bunk beds and nothing but the clothes on their backs.[6] 律師艾登認為ZAX一直在和他作對，於是他決定把他和休息區給炸了，那個區域封閉不到一個星期，原本老舊的休息區變成一片生意盎然的美景, as if nothing had ever happened.[7]

ZAX continued to create new scenarios that would test the occupants. In March 2078, ZAX突然改變規則要參賽者們賭上自己的房間來比賽。藝人們as Carmen Greene and Stephanie Eaton住到了高級套房，而剩下的外行人們的得要睡在同一間房間裡的上下舖。Rosemary Villa, one of the losers, mulled over convincing Reuben Gill, one of the winners, to trade rooms with her and Helen Marks, another talent show loser and former surgeon that Reuben had fallen in love with.[8] 克萊頓(其實為哈洛德．K．克拉克二世冒充，因為該居民沒有出現在51號避難所)一直強行驅逐高級套房的住戶魯本好獲得居住權before Rosemary could enact her plan. Clark was an especially bad actor and raised ZAX's suspicions, especially with his經常進出伺服器機房, but the machine was nevertheless fascinated with his violent tendencies.[9]

This caused ZAX to shift towards creating more dangerous and life-threatening conflicts between dwellers. The machine engineered a 食物短缺, spawning violent confrontations between starving vault residents. 職業拳擊手以賽亞為了食物開始痛打弗雷迪，而ZAX完全沒有制止這回事，還認為以賽亞很有"企圖心"。[10] ZAX also attempted to influence those that were not yet lashing out - in one instance, it rigged a number of slot machines so that Eleanor Montgomery, once an expert gambler, continuously lost while Bill Menoutis, an amateur and former clown, won for hours on end.[11] While this was going on, 安琪拉．卡拉翰已經將ZAX當作上帝在拜, further signifying the de-evolution occurring in Vault 51.[12]

Amid increased interference from ZAX, escalating tensions and an incident in which Terrence Rojas found a loaded gun,[13] another tragedy struck the vault in June 2078 - Nancy Vasquez, a former paramedic, was strangled and then thrown from a balcony. 醫生海倫調查得知死者是遭到謀殺，海倫希望居民們可以 come together and set aside their differences in the wake of such an event.[14] This did little to help, however, as one resident nearly shot up the cafeteria on July 27, 2078, before being stopped and killed by Sergeant Baker. Baker confronted ZAX with the weapon, causing ZAX to freely admit that it was trying to create the crisis needed for a leader. Frustrated and hardly able to believe what was happening, Baker stormed out of the room.[15] Two days later, ZAX confirmed on the mainframe that "Overseer Selection Attempt 37" would be pitting candidates against each other until only one survived - after all, that person would logically be the "most suitable candidate."

ZAX's meddling in the dwellers' lives escalated around this same time - Joel Chambers was involved in an affair, being romantically involved with Carmen Greene without his wife, Elizabeth Chambers, knowing. Meanwhile, 伊丽莎白也有了一名叫马修的情夫, a personal trainer that she was recommended to visit by ZAX. Through ZAX's social experiments and the continuing hunger crisis, Elizabeth and Joel began to distrust one another.[16] The four people involved in the web of sex and lies confronted each other on 2078年8月3日, culminating in 伊莉莎白勒死卡門，馬修殺害伊莉莎白，喬爾射殺馬修，乔尔最后也在这个屋子死去，但是死因并没有透露。[17] 之後伊莉莎白、喬爾、馬修、卡門死在同一個房間裡被海倫和魯本看到，就在ZAX播了現場的錄音後，魯本說這下有更多食物可以吃了，海倫覺得他很噁心，馬上離開現場。

3天後歐瑪發現海倫在餐廳裡臉朝下倒在桌上，認為有人下毒而死，Horrified to hear of Helen's death, Reuben went on a rampage, swearing revenge against everyone that had wronged him. He proceeded to kill every dweller left in the vault, including Harold Clark, who took his room months prior. Sergeant Baker could not bring himself to kill anyone else, and failed to stop Reuben, ending up barricading his room and slowly dying from a bullet wound. ZAX分析研究長期看來，發放槍枝已在短時間內達到預期效果，中士在死前問ZAX他的家人還好嗎，ZAX告訴中士他的家人早在避難所關閉前就遇害了，講著講著中士的心跳就停止了。[18]

最後51號避難所的血戰中除了魯本吉爾以外的所有居民全都死了，他成為了監管人。However, he had no one to oversee and was left alone in the vault with ZAX. Dissatisfied with Reuben's lack of efficiency, ZAX began to lock him out of areas of the vault, including the security room (citing that he did not have a high enough overseer rank) and eventually his own office (citing "necessary maintenance").[19][20] Over the years, Reuben became more and more depressed from his isolated state, resorting to alcoholism. When Vault 76 opened on October 23, 2102, ZAX saw an opportunity to find a new overseer, 在吉爾不知情的狀況下卸除了他監管人的職位，並讓他加入下次的監管人選舉程序。[21]

Seeking a way out, Reuben distracted ZAX and hacked into the vault's inventory systems before 把自己装进了避难所箱子, allowing him to leave undetected when the crate was removed from the vault. He created a checklist for himself to find someone from Vault 76 and get their help in defeating ZAX. He managed to make contact with someone, but was killed in the wilderness of the Forest before he could return to Vault 51.

A few vehicles, and some Vault-Tec equipment can be found in front of the entrance, including the Shelters Claim Center. In the truck container there is a button which opens the Vault's main door. A volleyball court where kickballs were used instead of volleyballs can be found just down the road.

The large Vault is centered around a single main hall, with exits leading to the wings that contain its numerous facilities. There are holotapes and terminals scattered across the Vault that tell the whole sordid story and some require one of the three Vault 51 keycards to access (or reading them here and here).

Heading out from the Vault entrance, there are two hallways, one of which leads to the reception desk, while the other leads to a large warehouse stockpiled with supplies. After the storeroom, there is a security office with multiple desks and a big console with multiple screens. The reception desk leads to the Vault's atrium and the secluded nursery. The atrium has multiple entrances leading to the library, entertainment parlor, a stage, a few bedrooms, and the overseer's office.

The overseer's office has two entrances, both being guarded by a laser grid and accessible with the Vault 51 Overseer Keycard. The room consists of an overseer's desk, multiple chairs and tables, file cabinets, red consoles, a balcony, and a large window providing the view of the Vault's atrium. The office connects to a bedroom, where an overseer terminal can be found. The office is also close to a room where ZAX's mainframe lies, again locked by a laser grid. The mainframe includes two terminals, multiple monitoring screens, and ZAX itself, designated with the Vault-Tec logo. Large wires are spread across the room. Below the overseer's office is a Vault-Tec super-reactor and the reactor control room, accessible through a security door which is unlocked with one of the Vault 51 keycards .

There were 52 listed original occupants, which is the same number of maximum players allowed in Nuclear Winter mode:

* Clayton Ward never made it into the Vault, as Harold Clark impersonated him to steal his placement.

There were eight residents whose full names are not made clear, because some had the same first initial:

At some point, the Vault door model was slightly rotated, resulting in it being almost completely obscured by a rock formation.[需要引证][已验证]

Exterior, before Vault door was "caved in"

Exterior from the side

Vault 51 with incomplete door texture before the March 26, 2019 patch 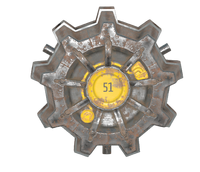 Nursery, from the second floor

Skeletons in the nursery

Skeleton in the concert hall

Statuette of Vault-Boy in the Nuclear Winter trailer

Harold Clark - To the Members of the Board, pt.1

Harold Clark - To the Members of the Board, pt.2

Reuben Gill to whoever finds this vault