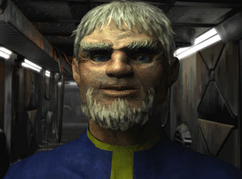 Jacoren[1] is the overseer of Vault 13 in 2161. He genuinely cares about the Vault Dweller and everyone in the community, though he can be a bit paternalistic, even condescending, at times.[2]

When the vault's only functioning water chip was damaged and shut down, he sent one of the vault dwellers, who later became known as the Vault Dweller, into the wasteland to find a replacement chip. In the course of his adventure, the Vault Dweller ended up defeating the mutant threat, and was subsequently expelled from Vault 13, as Jacoren thought that he would ruin the Vault Experiment by convincing people to leave the Vault.

Despite the Dweller's exile, many people chose to follow him into the wasteland. Jacoren's fate after said event is not made clear. He can try to stop those who want to leave and eventually be tried and sentenced to death for his crime, probably after the dwellers learned about his involvement in the Experiment,[3] or he can be killed at the hand of the Vault Dweller after the goodbye speech.[4]

He was fully aware of the Vault Experiment program conducted by the Enclave,[5] and therefore tried to do everything to keep Vault 13 closed for 200 years, just as the program dictated. As it is quite unlikely that he could have been more than 100 years old, the knowledge about the experiment was probably passed to him from the previous overseer.

If the player character has an Intelligence below four, Jacoren will explain things in a slow and simple manner. At times getting frustrated over doing so.

* In the Overseer chair. 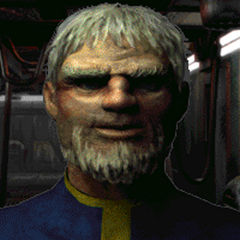 "Do your best. Remember, we're all counting on you.""> 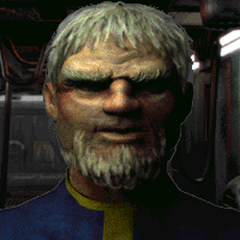 "We've debated this before. You ought to know now, after being out there! You think the rest of us could survive that? Besides, I'd be out of a job! I'm management! It's not like I know how to do anything useful!"">

"Nothing? No, oh no! It was something. Don't downplay what you've done. You've saved a lot of lives. All right, now we need a report on what's out there. Please go to the library."">

"They'll want to leave. What happens to the Vault if we lose the best of a generation? What if we are the only safe place in the world? You just gave us back all these lives... I can't take the chance of losing them."">

"I've made a lot of tough decisions since I took this position. But none of them harder than this one. You saved us, but you'll kill us. I'm sorry. You're a hero... and you have to leave."">

Jacoren appears only in Fallout, as a talking head.

He was also to appear in the canceled Fallout movie, where he was to be revealed as the founder of Vault-Tec and the man who started the Great War.