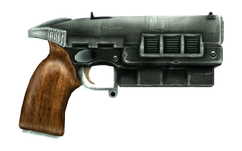 The 12.7mm pistol is a weapon in Fallout: New Vegas.

A pistol chambered for 12.7mm rounds.

The 12.7mm fires and reloads like a 9mm, but packs a more serious punch. This pistol has the third highest base damage-per-second of any non-energy pistol in Fallout: New Vegas, bested only by A Light Shining in Darkness (144.4) and Li'l Devil (GRA) (146.3). It takes a Guns skill of 75 and a Strength of 7 in order to take full advantage of the weapon. Its only drawbacks are poor accuracy (it has the highest weapon spread of any pistol in the game, comparable to even some automatic weapons) and its lack of being a holdout weapon.

The 12.7mm pistol has the same durability as the less powerful 10mm pistol; it can fire a total of about 395 standard rounds, the equivalent of 57 reloads, from full condition before breaking. Template:Durability table

It is modeled after the 14mm pistol from both Fallout and Fallout 2, the only difference being the magazine does not protrude from in front of the grip. Instead, the magazine is reloaded just like most conventional handguns, such as the 9mm pistol.

12.7mm pistol with the silencer modification