Trudy arguing with Wolfgang during Order Up

The Drumlin Diner is a building in the Commonwealth in 2287.

A small, oval-shaped diner with a small sized car park surrounding the exterior. Many of the diner's tables are broken or missing. There's a floor safe in the area to the right upon entering the diner via the front door.

The Drumlin Diner appears only in Fallout 4.

The name "Drumlin Diner" is likely based off Mass Audubon's Drumlin Farm, located in Lincoln, MA. On the map, Drumlin Diner is located in the land space where Lincoln would be. 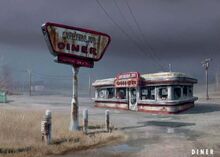