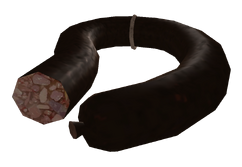 One may be found on Patient Zero at the X-22 botanical garden.

Like thin red paste, the other item created by Them's Good Eatin', the term "blood sausage" is used in one of the graphic combat results featured in the combat prose of the Fallout series' spiritual predecessor, Wasteland. It would typically appear in the form of "[player name] rips into [target name] like a scarlet side of meat, exploding it like a blood sausage."

As seen in Them's Good Eatin'