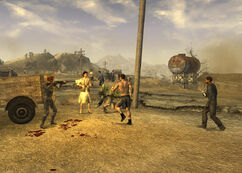 “About a week ago, this trader, Ringo, comes into town. Survivor of an attack, he says. Bad men after him, needs a place to hide.”— Trudy

Ghost Town Gunfight is a side quest in Goodsprings for Fallout: New Vegas.