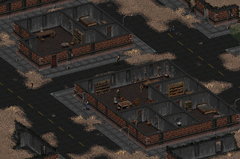 The Heights is a district in the west part of the Hub in 2161.

Guards surround the area to protect Daren Hightower, one of the lead merchants. Rick protects the entrance of the Heights, George is the door guard, and Leon is Hightower's personal bodyguard who stands beside his room and decides who goes in and out. Mrs. Hightower stands by a table inside, though apparently has been sheltered from normal conversation.

Necklace - In Daren Hightower's strongbox in his house.

If the Vault Dweller attempts to join the Thieves' Guild, their 'test' of approval is to Steal necklace from the Merchants which is in Hightower's safe in the room beside his.[1] The safe is equipped with a trap and a lock that are typically above the Dweller's level at an early stage in their adventure.

If Decker has been asked for some work, the first job is Dispose of merchant[2], Mr. Hightower and his wife. Attempting to kill either of them alerts every guard into hostility.[3] Killing Mr. Hightower and not killing his wife will result in a lesser reward from Decker and refusal to do business with him again.