“Imagine a picture, okay? A picture of the Capital Wasteland. All that brick and rock. A whole lot of nothing, right? There's people out there trying to just barely make it from day to day. Fighting to stay alive and make something out of what they got. But then you've got all kinds of shit... Slavers, Super Mutants, Raiders... They all want a slice of the pie too and aim to take it by force.”— Three Dog

The region known as the Capital Wasteland has been severely warped by the apocalypse. Although it was a lush temperate region before the war, the climate shift caused by the unprecedented scale of nuclear warfare unleashed on the world has led to desertification. Once made fertile by the Potomac, the Capital Wasteland turned increasingly desolate as the river dried up over the years. By 2277, the once-mighty river is little more than a swamp, with wastelanders able to cross it with dry feet in most places above roughly the neighborhood of Foggy Bottom. The drying up of the watershed has impacted the ecosystem and agricultural prospects in the region, with most plants unable to thrive in these conditions and the population of animals falling down accordingly.[2]

The situation changes in the more urbanized areas of the region. Washington, D.C. weathered the nuclear storm but sustained severe wounds in the process. Much of the downtown area of the city has been reduced to rubble, its buildings but shells containing hundreds of tons of rubble. Certain neighborhoods evaded complete destruction and remain in better shape, although that's not saying much. Curiously, the automated infrastructure has survived intact, with automated power stations continuing to provide power, allowing capable survivalists to benefit from the technology of the ancients.[3]

The adjoining territories of the pre-War states of Maryland and Virginia are home not only to derelict villages and townships, but also remnants of the pre-War grandeur of the United States: the grand Fort Bannister and the mysterious Fort Constantine, the crumbling Wheaton armory and National Guard depot, and what remains of its industry; the Corvega factory and the Nuka-Cola plant, as well as the extensive pre-War power line and monorail networks of Virginia and Maryland are but a few examples.

Compared to the rest of the United States mainland, the Capital Wasteland appears to suffer from severe contamination. Even two centuries after the war, the remaining radiation continues to interfere with agriculture, with all but the hardiest mutated plants able to take root in the contaminated soil.[4] Most cities cannot support regular agriculture and trade for the necessary food. A fine example is Megaton, which has its own water treatment plant, but lacks agriculture and buys its food from traders.[5]

Much of the wildlife inhabiting what is now called the Capital Wasteland died out. While the ecosystem has been severely damaged, some species survived and adapted to the changing circumstances. For instance the mirelurks are pre-War crab and turtle species that inhabited the Potomac, which has adapted to survive in the radioactive waters of the semi-dried upriver.[6][7] Yao guai are also fierce, mutated bears indigenous to the region, whose natural lethality and resilience were only enhanced by radiation-induced mutations. radscorpions are also a common sight, evolved in much the same way as their cousins in the west. Their smaller insectoid siblings, bloatflies, have also increased in size, though are relatively harmless – and a good source of protein for hunters.[8]

The relatively stable, even natural ecosystem that emerged in the Capital Wasteland is disturbed by a unique type of wildlife, endemic to the border areas of Virginia: Vault 87 super mutants. These giant, yellow-green beasts have a rudimentary level of intelligence and are capable of constructing simple structures and clothing, as well as operating tools of varying complexity. A fixture of the Wasteland since 2078, they became a permanent nuisance, dragging away people to be turned into super mutants, but never achieving major success due to their brain damage and lack of organization. Unlike other animals, super mutants are seen largely as pests and culled appropriately when practical.[9]

In general, the economy of the Capital Wasteland for much of its existence was predominantly focused on subsistence and scavenging. The depopulation through nuclear fire has ensured that vast amounts of wealth remain untapped within the ruins, for those brave enough to enter them and scavenge. As mentioned above, slavery was a particularly lucrative business, though with a limited clientele, though certain locales, such as The Pitt and Paradise Falls have a high demand for slaves.[10] Hunters could also expect to make a good living in the wasteland, as the changed ecosystem still produced prey that can make for a fine source of meat – even if that prey moved on two legs.[11] The only settlement with a major agricultural output was Rivet City, the primary supplier of edible, non-irradiated food in the Capital Wasteland, trading foodstuffs grown in its hydroponic bays for essential raw materials with other communities.[12]

Despite the harsh realities of the wasteland, a caravan route was set up by Canterbury Commons' "Uncle" Ernest Roe, providing one of the few reliable links between existing settlements. It was maintained by four merchants with modest protection and provided much needed economic exchange between the isolated settlements in the wasteland.[13] Another trade route led as far as Point Lookout, operated by Tobar, who exchanged punga fruit and other goods produced in the region for salvage and other necessities produced by the Capital Wasteland.[14]

Two weeks after the Battle of Project Purity, water merchant caravans could be found, transporting Aqua Pura to denizens all across the wastes, though some took advantage of the opportunity by selecting certain clientele and selling them snake oil.

By 2287, with the activation of Project Purity and the Brotherhood's rapid recovery, the situation stabilized greatly. The Capital Wasteland became a major exporter of water and salvaged technology, enabled by the Brotherhood's firepower and Vertibirds.[15]

Compared to the developed lands of the West Coast, the Capital Wasteland lived up to its name after two centuries. The individual settlements were few and far in between, with the heavy presence of wild animals and especially human raiders, as well as the absence of viable farmland or stable sources of water heavily inhibiting the ability to recover. The largest settlement and de facto hegemon of the Wasteland was Rivet City, the primary supplier of edible, non-irradiated food in the Capital Wasteland, trading it for essential raw materials with other communities.[12] Its scientific prowess was thanks to its aggressive reclamation efforts: anything useful was snatched up and brought to the City.[16] However, it refrained from recruiting scientists from outside settlements, such as the Underworld or Tenpenny Tower, as the vote proposing such an initiative failed in the council.[17] The city also had the fourth most powerful military force in the wastelands, right after the Enclave, Lyons' Brotherhood of Steel, and Talon Company. Although named as a simple security force, combat training was provided by wasteland veterans (Lana Danvers and Harkness) and each trooper was equipped with military-grade Army combat armor and automatic weapons.[12]

The Enclave was briefly the single most powerful faction in the wasteland, boasting a coordinated, regimented army backed up by Raven Rock's industrial capacity, a fleet of Vertibirds, robots, and political leadership of John Henry Eden. However, internal disagreements coupled with a series of tactical and strategic blunders brought an end to its aggressive campaign of expansion into the Capital Wasteland. The Enclave was reduced to disorganized remnants after their defeat during Purifier Conflict, following the loss of all their major command centers, weapons stockpiles, and the bulk of their manpower.[18]

Lyons' Brotherhood of Steel entered the year as a diminished, weakened force, suffering from a shortage of qualified combat personnel and severely depleted stocks of weapons and equipment, a direct result of twenty years of attrition warfare against the super mutants. Though once it reached far up the Potomac and its patrols protected settlements like Megaton, the Brotherhood's presence was eventually limited to the Citadel and only a handful of reinforced outposts scattered across the District of Columbia metropolitan area.[19][20][21][22][23] The legacy of the war with the mutants was amplified by the Schism and the formation of the Brotherhood Outcasts in 2276. A year after the split, the Outcasts expanded into the wasteland with regular patrols scouring the wasteland for technology and began to excavate several locations, including the Virtual Strategic Simulations facility, in order to complete their original mission objectives. Ultimately, they planned to regroup with loyalist chapters in the West, though that plan was put off due to the need to protect Fort Independence and their considerable stockpile of powerful technology.[24] However, the defeat of the Enclave brought a much-needed injection of ordnance and technology, allowing Lyons' chapter to make a dramatic return within the next decade.[18]

Beyond the three organizations, the largest active group was the Talon Company. Rumors circulated that an unknown client has hired it to instigate a campaign of terror, preventing any meaningful recovery from taking place.[25] Slavers of Paradise Falls, a major supplier of slaves to The Pitt and clients throughout the Capital Wastes, were disinterested in power plays and focused on enslaving the weak for the benefit of the strong – and their own coffers.[10]

There were plenty of other, smaller settlements in the Capital Wasteland of 2277, existing outside the rudimentary power structures. The most unique of these was the Underworld, a haven for ghouls set up in the Museum of History. As it lies in the center of an active war zone, it was fortified to defend against all but the most persistent of attackers.[26]

Following the disastrous conflict with the Enclave, the Brotherhood enjoyed a stable, but hardly unrivaled position. Suffering from severely depleted stockpiles and shortage of manpower at the beginning of the conflict, casualties taken during the fight with the Enclave and the loss of their most important military asset, Liberty Prime, made the future uncertain. Occupied by its research into the Enclave technology and the amount of gear and weapons it recovered, the Brotherhood slowly regained strength as it slowly chipped away at the years-long process.[27][28] One of the greatest achievements of the Brotherhood of this time was starting the construction of the Prydwen, an armored airship greatly increasing the Brotherhood's ability to project power.[29]

The biggest setback suffered by the chapter was the death of Elder Owyn Lyons circa 2278 and the loss of his successor, Elder Sarah Lyons, later that same year. With the seat of power emptied, the remaining Brotherhood members elected multiple ineffectual leaders, while the adolescent Squire Arthur Maxson matured into a capable warrior and tactician, eventually securing a victory over Shephard, the new warboss of the Capital Wasteland super mutants, in 2282. This feat earned him a provisional leadership position. In fact, this position was bestowed by West Coast Elders, who revealed that they still monitored their errant brethren. Maxson's position solidified in 2283, when he negotiated a treaty with the Brotherhood Outcasts, bringing them back into the fold and reforming the entire organization, merging Lyons' Doctrine with salvageable elements of traditional doctrines. Lyons' Brotherhood became a distant memory as Maxson took the united Brotherhood forces into a new direction. While some members found this distasteful and deserted,[30] many more remained, proud to serve a refocused Brotherhood.[31]

As a result, the Brotherhood became the single most powerful organization in the Capital Wasteland, exercising firm control over the region out of the imposing Citadel[32] and Adams AFB.[33][34] Under its control, the wasteland is a stable place, exporting goods and giving wastelanders a chance at a life beyond mere subsistence.[15]

廢都只在輻射3中出現。It is also mentioned frequently in Fallout 4 and Fallout 76 and its update Wastelanders. 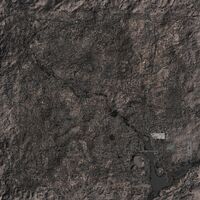 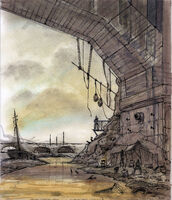 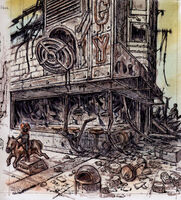 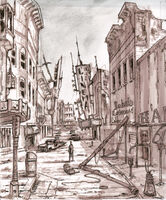 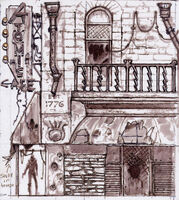 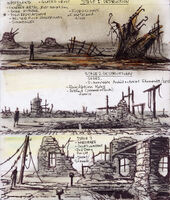 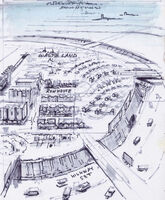 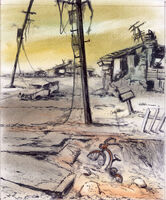 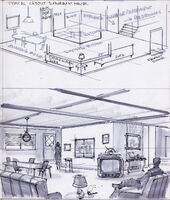 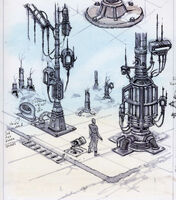 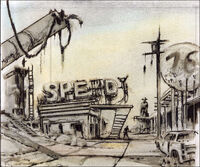 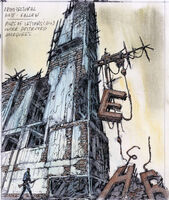 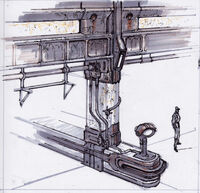 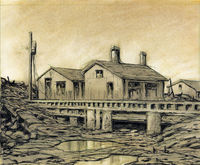 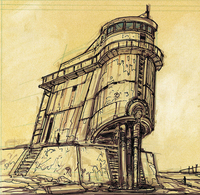 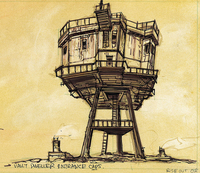 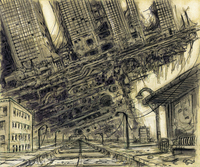 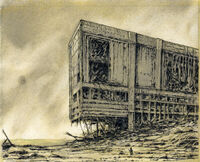 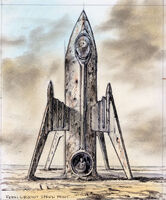 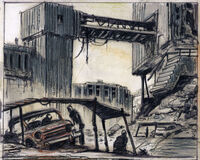 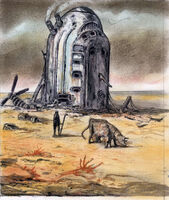 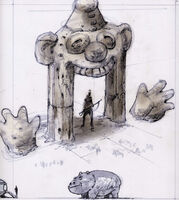 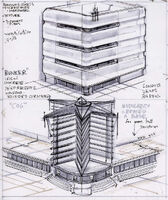 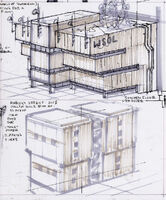 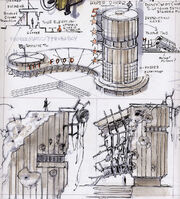 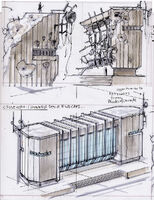 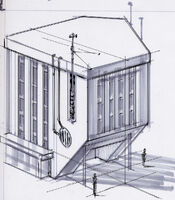 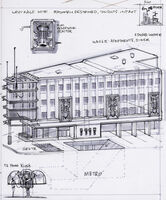 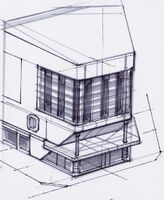