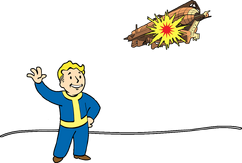 “Please, know that I take no pleasure in this. I have never been one to advocate violence. There is simply no other way.”— Father

Doctor Li or Doctor Watson greets the Sole Survivor and then leaves Rosalind Orman to explain the details of this quest. She explains that the target is the base of the Brotherhood of Steel operations in the Commonwealth - the Boston Airport. It is shielded by an electromagnetic shield that makes it impossible for the Institute to teleport troops into the base. The plan is that the Sole Survivor will take down the field by infiltrating a poorly-guarded part of the airport, and from there work a way through to the generators and destroy them. For each generator that is destroyed, the Institute will teleport some synths into the base. The player character is provided with a couple of Institute beacons, which are used to relay synths to the location in which they are thrown.

After that, the Sole Survivor will go to the main target - Liberty Prime. Doctor Li explains that it is an old weapon, and also tells about her role in making it operational. Working with Liberty Prime has given her good knowledge on how it works, which will now be used to manipulate it. Rosalind enthusiastically explains that a synth has been programmed with a computer virus and will transfer it to Liberty Prime, making it believe that the Brotherhood airship the Prydwen is a communist vehicle. The Sole Survivor is to escort that synth safely to Liberty Prime.

Following the conversation the player character is relayed from the Institute to the airfield in order to execute the plan. Firstly, one fights their way to the generators, and then to Liberty Prime. They then climb up to the head of the robot so that the hacker synth can begin uploading the virus. The player character must then defend the hacker against a massive assault from both the air and ground. Before finishing the upload, Elder Maxson attacks via a vertibird. If the vertibird is destroyed, he will fight on the ground. This gives the opportunity to obtain his Elder power armor and his unique weapon: Final Judgment. When the upload is complete, Liberty Prime will announce that it will attack the "communist" vessel, and fires its eye laser at the ship. As the ship begins to fall, the Sole Survivor will be teleported a short distance away to observe the fiery wreckage.

The quest completes, and the next quest starts.