Climbing up on the boulders to the left of the first two pillars in the first large room near a small puddle, you will find you can continue to walk up the boulders, staying close to the wall. You should be able to get in on the far left side of the opening. You may need to crouch to get in, but once in you can stand up - even Fawkes can get in here. There appears to be another opening on the left, but you cannot get through this one. Straight ahead or to the right is one of these small loops, it is however a closed loop and does not lead to the long tunnel on the left. The opening to the left of this hidden entrance can be accessed partly from the opposite side - similarly by bouldering up. This is directly ahead of the entrance to the Shalebridge tunnels at the south end of the small loop. There is another small opening that appears to be the entrance to the long tunnel below it, on the ground level. You cannot enter either opening, even when crouched. A similar inaccessible opening is at the very end, centered in the back wall of the last cave with the eggs and the compost pile.

on the ps3 mister crowley has appeared after injecting the cluster of ant eggs and waiting 24 hours. 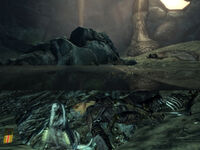