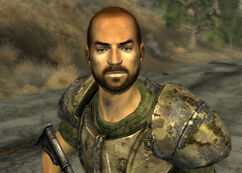 “Just doing what I'm paid to do - harass the muties until they leave or attack us. If they leave, we let 'em go. If they attack, we wipe them out.”— Norton

Unfriendly Persuasion is a side quest in Fallout: New Vegas.

The second time one visits Jacobstown, Marcus will approach with news of New California Republic mercenaries harassing the town. He will then ask the player character to peacefully deal with them. When asked why the mutants don't kill them, Marcus says it is to avoid giving the NCR an excuse to exterminate Jacobstown.

To resolve the quest, the Courier can return to the entrance of Jacobstown and approach the mercenaries. They have the choice to pay them 2500 caps or tell them to leave with a Speech check of 65. If the player character has a very high NCR standing they may also be able to tell them that they are an NCR hero, upon which their leader Norton will recognize the player character and they'll leave. If the Courier doesn't have 2500 caps, they can talk to Marcus who can be asked for 2000, 2500, or 3000 caps to pay off Norton and his mercenaries (requesting 3000 results in negative Karma).

Alternatively, the player character can also kill them, but this leads to a lower XP reward and lowered reputation with the NCR. After completing the quest the player character will gain 350 XP, or 250 XP if they asked for caps from Marcus, regardless of whether they used a Speech check or gave the caps to Norton.

The quest title is a play on words for the 1956 song "Friendly Persuasion".

After convincing Norton to walk away via caps, the area just south of Silver Peak Mine shows a non-hostile non-player character on the compass. The spot the compass points to shows an option to talk to Norton and one or more mercenaries. Doing so does not activate a dialogue. [已验证]