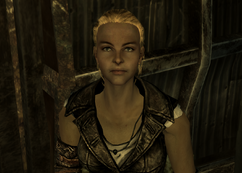 露西於2252年出生在斷橋鎮。At age 25, she struck out on her own and headed for the "big city," leaving the small settlement of Arefu 並前往核彈鎮，where she currently resides. 即使露西離鄉背井，她很思念她的鄉親以及親弟弟伊恩‧維斯特。她經常透過信件與他們溝通，但最近都沒收到回信，她擔心可能出了甚麼意外，或是信件並沒有成功送達。[1]

Lucy West appears only in Fallout 3.

Lucy's name is a possible reference to the character Lucy Westenra from Bram Stoker's Dracula. They both have connections to vampires, and they were the first victims of a chain of unfortunate events that affect their loved ones.