“It was corporations like this that put the last nail in the coffin for mankind. They exploited technology for their own gains, pocketing the cash and ignoring the damage they'd done.”— Paladin Danse
135px

在2076年3月 , XMB團隊在計畫一個月後遭受了挫折, 出現重量超标的问题[6]，setting them potentially three to six months behind schedule[7]. Reinhardt also became increasingly paranoid about security, 在辦公區安裝保全炮塔並讓旗下員工配戴識別證避免被炮塔開火。[8]七月，太空總署展開火星發射計畫的公關活動，resulting in an increase of popularity and media coverage at ArcJet, causing Reinhardt to lie about their progress[9]. In November, McClellan was able to fix the engine's weight issue, allowing ArcJet to finalize the project[10].

By 2077, ArcJet was able to complete the deep range transmitter project, allowing them to earn the proceeds from their contract. In February 2077, ArcJet planned to hold a press event to show off the first USSA test fire of the XMB booster engine[11]. 然而测试当天，有一個新聞記者跑進引擎核心，被推进器的烈焰烧成了焦炭。The press event was cancelled and 萊因哈特叫布倫特隱瞞這起事件的經過prevent them from losing their contract[12]. By September, the USSA warned Reinhardt that they may have to delay the Mars Shot Project due to the conflicts overseas[13].

In October, Dr. McClellan discovered the cover up of the dead reporter and told Reinhardt he 要直接報警。萊因哈特威脅要麥克萊倫還有他家人的命。 Despite this, McClellan still planned to把帶子交給媒體。[14]

The upper floors of the building have suffered massive internal damage, making it a maze of collapsed floors and ceilings. This area consists of a main lobby area, offices, restrooms, data storage, and board rooms.

After passing the lab control room is a lobby defended by two ceiling mounted machine gun turrets and a handful of synths. This lobby gives access to several rooms which contain a weapons workbench, an armor workbench and a chemistry station. In the room with the chemistry station, an Expert locked terminal can be used to unlock a nearby Expert locked safe. In the eastern room, some stairs are leading up to the office area.

The office area is first accessed through the CEO's office, in which the Tesla Science Magazine issue #1 can be found. The corridors are heavily defended by 4 ceiling mounted turrets although they can be deactivated from a terminal located in the first room on the left hand side. In the northwest corner, a collapsed floor gives access to the receptionist area where a Advanced locked safe can be found and where stairs lead down to the ArcJet engine core.

Beneath the main building is a large rocket engine test chamber. The XMB booster engine can be found suspended from the ceiling. At the bottom of the chamber is a facilities terminal inside a small control room that can be used to restore auxiliary power. The engine is still functional and can be activated by pressing the start button in this control room once power is restored. The engine will test fire and the intense flames from will turn all synths inside the chamber to piles of ash. This can only be done once and cannot be repeated.

The only way to access the top section of the chamber is to ride the elevator due to collapsed stairs. At the top is a main control room and multiple synth enemies. Here one can find the deep range transmitter and an elevator to the surface.

ArcJet Systems appears only in Fallout 4. The ArcJet G-Force attraction is also sponsored by ArcJet in the Fallout 4 add-on Nuka-World.

Main lobby upper balcony - duffle bag next to the couch

Stingray Deluxe on display in front of the building. 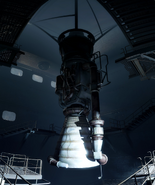 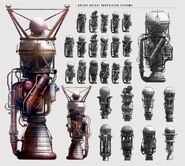