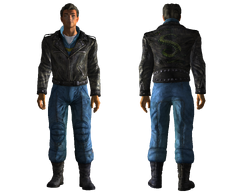 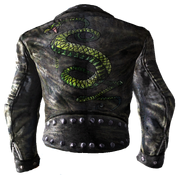 The back showing the logo

The Tunnel Snake outfit is a piece of clothing in Fallout 3.

It is a leather jacket with a snake emblem on the back, worn on top of a Vault 101 jumpsuit. It is worn by the Tunnel Snakes gang in Vault 101 and provides a Damage Resistance of 4 and a bonus of 5 to Melee Weapons. To repair it, the Lone Wanderer needs another Tunnel Snake outfit.