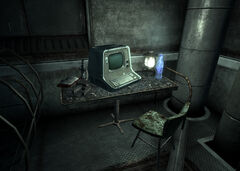 Ryan's terminal and the Quantum

In the tunnels you will find an assortment of common loot (ammunition, crafting tools, food etc.) with emphasis on Mole Rat Meat and Wonderglue. These two forms of loot are particularly abundant because of a scientist named Ryan Brigg experiments with creating a better tasting Mole Rat Meat. It appears that he (with much distaste) joined the Raiders to further his studies, eventually becoming their leader by paying them for Mole Rat hunting and any Wonderglue they might find. Unfortunately for the Raiders, Brigg's experiments also seem to have increased the aggressiveness of the Mole Rat colony living inside the tunnels, leading to frequent attacks by the Mole Rats against the Raiders' positions.

In the tunnels you will find Brigg's Wonder Meat Maker. With this you can combine wonderglue and mole meat to get a piece of Wondermeat.