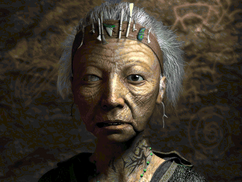 In the early years of Arroyo, the Vault Dweller and his wife Pat led the village and the tribe. The tribe grew, and grew strong with their help. In 2188, their daughter, who later became the Elder, was born. Eventually, she and their other children became the leaders of the community.

On January 16, 2208, several years after Pat's death, the Vault Dweller wrote his memoirs. Soon after that, he vanished from Arroyo and was presumed dead. Some say the Vault Dweller was taken by the sky spirits, others say that the Vault Dweller felt it was time to move on and leave the Elders to guide Arroyo to its destiny. After the One-Moon (Month) Cycle of mourning for the Vault Dweller ended, activity in Arroyo began to return to normal.

The elder's son, later called the "Chosen One", was born on March 23, 2221. His father is not recorded in the tribal records. The reason for this is unknown, but the elder may have simply been embarrassed.

In 2241, the worst dry season in many years causes a drought in the Northern California area, hurting crops and brahmin in Arroyo. The elder, having read a GECK advertisement in her father's old holodisks, decides that her child must be sent to find it, as it is the village's only hope. After descending and finishing the Temple of Trials, she gave him $152 and a water flask, and the Chosen One left the village in search for the ancient device.

While the Chosen One was on his quest, on July 20, 2242, Arroyo was attacked by Enclave soldiers in vertibirds, wearing power armors, armed with energy weapons, and the villagers, including the Elder, were enslaved and brought to the Oil Rig. Some of them tried to resist the attackers and were killed, and Hakunin was seriously wounded.

The Enclave needed the tribals for their FEV experiments. They needed two test groups: one of clean, pure humans and another composed of the 'mutants' that lived all over the mainland, suffering radiation and FEV exposure for decades that, to the Enclave, made them unclean. The unclean sample was easily obtained by kidnapping the entire population of Arroyo. The clean group were the dwellers of Vault 13, who were reunited with their long lost Arroyo brethren in Enclave prison cells.

In Fall 2242, the Chosen One managed to enter the Enclave Oil Rig using a damaged tanker and destroyed the Poseidon Oil platform, killing the President of the United States and ending the Enclave's plans for world domination. The surviving people of Arroyo and Vault 13 were freed, the Elder among them, and was brought back to the mainland in the oil tanker the Chosen had used to reach the rig.

The Arroyo elder lived for many years after the destruction of the Enclave. She seemed pleased that the ancient separation between Vault 13 and the Vault Dweller had been reconciled, and many were the times she told the Chosen One that she wished the Vault Dweller were alive to have seen the reconciliation take place. Certain that the safety of the new village had been secured and the new community was flourishing, the Elder passed away a few months later in her sleep.

Many of the older Arroyo residents believe that she now lives in the vault of the sky, telling the Vault Dweller of the Chosen One's brave deeds.