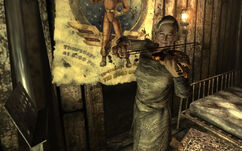 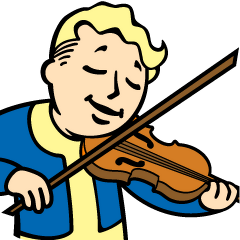 Agatha's Song is a Fallout 3 quest. It is also an achievement/trophy.

Retrieve the Soil Stradivarius (pronounced “swal”) from Vault 92 for Agatha, an old woman living alone in her house in the Capital Wasteland.

Agatha is an elderly violinist who broadcasts her music through her late husband's old radio gear. She wants to get back the Soil Stradivarius, which was owned by her great-great-grandmother's sister Hilda. Agatha believes the violin is still in Vault 92, where the nation's best musicians were housed. She offers the frequency of her radio signal as a reward, but with an easy Speech check or a high Charisma, she'll also immediately provide the key to her husband's ammunition box in exchange for promising to get the violin for her. Having the Lady Killer perk makes the Speech/Charisma check unnecessary. She doesn't know the location of the vault, but if asked she can provide the location of Vault-Tec headquarters on the Pip-Boy 3000. At this point, going to Vault-Tec headquarters may be entirely optional, considering that the locations of all vaults in the Capital Wasteland will become available while doing the main quest "Picking Up the Trail".

Getting to Vault-Tec headquarters (Optional)

Discover the location of Vault 92

Once inside Vault-Tec headquarters, head for the Vault-Tec mainframe. The building is divided into three sections: Guest Relations (Lobby), the Corporate Offices, and the Administration. The building is still protected by several automated units such as Protectrons, robobrains, turrets, and, depending on character level and the game difficulty setting, sentry bots. A good supply of pulse grenades should help here. There are also a few remaining super mutants in the lobby.

If the quest 'Picking Up the Trail' is already active, then the locations of all Vaults will be marked on the Pip-Boy map by Scribe Rothchild in the Citadel laboratory, during the start of the quest.

Recover the Soil Stradivarius from Vault 92

At the bottom of the staircase and around a corner is a 4-way intersection. Directly ahead is an average-locked storeroom with a Stealth Boy, ammunition boxes, medical supplies, and an average-locked safe. To the right is a room with the first mirelurk king (or mirelurk hunter), a jukebox, a soda machine, a refrigerator, and a pre-War book. To the left is a T-intersection. The computer terminal that grants access to the music studio (and the second mirelurk king or mirelurk hunter) is to the left of the T-intersection. It also contains a Nikola Tesla and You. The violin is to the right of the T-intersection, with a laser pistol and an Easy-locked safe with another Stealth Boy.

Bringing Agatha back a sheet music book, which can be found in Vault 92 and several other locations (see: sheet music book), leads her to turn over the Blackhawk (a unique .44 scoped Magnum) and 12 .44 Magnum rounds that were previously owned by her husband who passed away. Getting the Blackhawk requires asking for the reward (second option). Being rude towards Agatha causes the Blackhawk's condition to be somewhat facetiously halved. Lacking a sheet music book when talking with Agatha again leads her to mention that she needs music paper to write her music on; she will then make the request to retrieve some for her.