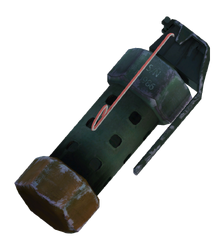 “You have found a Flash Bang grenade! Flash Bangs are special grenades that:


- Have a chance to Frenzy Tunnelers.”— "Flash bang information" note.

The flash bang is a thrown explosive in the Fallout: New Vegas add-on Lonesome Road.

The flash bang is a different type of grenade that deals fatigue damage. In addition, they also reduce enemy weapon skills and have a chance to frenzy tunnelers. Upon detonation, the grenade releases a large explosion of blue colored energy.

Getting caught in a flash bang's radius causes the screen to either blur or turn completely white, depending on how close the Courier was to the blast. In addition, their hearing is severely affected. Combined, these effects can severely hamper combat effectiveness.

Flash bangs do not exclude the player character or robots from receiving Fatigue damage as other sources of Fatigue damage do. This can allow the Courier to render a robot or even themselves "Unconscious." [已验证]