长江31号 (Yangtze-31)是赵船长指挥的中國弹道导弹核潜艇。[1]2287年，老冰棍探索发现该艇時，它被困在波士顿机场以南、四叶鱼肉包装厂东北部的联邦沿海浅水区。The submarine is not marked on the map until the Sole Survivor swims out to her. Upon discovery, the quest Here There Be Monsters will automatically be started if it hasn't been received already from Donny Kowalski near the Shamrock Taphouse.

战前长江31号被派往美国大西洋沿岸巡逻。该艇搭载6枚弹道导弹，数枚短程导弹，4具鱼雷发射管.It is unknown if the vessel experienced any combat prior to the Great War.核战时长江31号接到命令向美国发射弹道导弹，5枚成功命中目标，最后一枚没有发射成功。

The Yangtze is a unique design for a ballistic missile submarine.三具倒三角倾斜布置的大直径螺旋桨在艇身中部，其中下方的螺旋桨在核反应堆控制室后。The sub's design is unique as所有设备都位于艇身前半，后半结构细长，方向舵带有小型螺旋桨。

The first room the Sole Survivor comes to when entering the submarine is the control room/bridge where Zao is located.

Down the stairs is the reactor control room with a radio room on the port side (left when facing forward). There are two doors on either side of this room that go to a small room with a cage wall and a large machine behind which is presumably the propeller drive shaft.

Behind the reactor room and under the bridge is a room with the machinery and instrument panels. On the port side of the room is Captain Zao's quarters and on the starboard side is the officers mess.

Past the reactor room on the upper floor is a small room that contains two decontamination showers and a locked door with a stairway to the lower deck. There is also a science lab on the port side of the room.

Forward of that room (still on the upper level) is the sub's mess room, galley, and food storage (the room opposite the galley). Forward of the mess is the crew quarters, containing 80 beds (configured in 8 stacks of three and 14 stacks of four), the sub's lavatories and a laundry room (port side), as well as the ships med-bay/infirmary (starboard side).

At the front of the quarters are two doorways that lead into each other at the front of the sub, then lead into a room on the lower deck that contains machinery with a workshop on the starboard side and a storage room on the port side. The next room contains a doorway on the starboard side leading to the sub's armory, and a hallway at the end leading to the silo room.

The silo room contains the 6 missile silos with 3 along each side. Each silo has an access hatch that allows the crew to access the SLBM inside. All are closed except the one with the missile that failed to launch. The next room is a small room before the reactor room which contains a locked door to the upper level. Unlike the only other Chinese submarine the player character can personally encounter in the series, SSN-37-1A, the Yangtze is in fact a full-scale combat vessel with extensive crew amenities and visible missile and torpedo tubes. It is shaped very differently to any real-world submarine, unlike the SSN-37-1A, which bears a very conventional (albeit small) design.

The Yangtze only appears in Fallout 4. 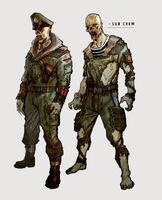 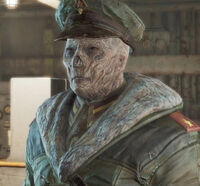