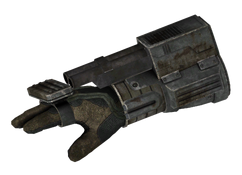 The ballistic fist is a weapon in Fallout: New Vegas.