Uranium ore is an Unarmed and Throwing weapon in Fallout 2.

Uranium (atomic number 92, symbol U) is a radioactive element that forms the basis for most nuclear weapons. As such, it is not uncommon in the post-War wasteland.

The mine in Broken Hills is the only consistent source of uranium (located in a footlocker in the secret section of the mine), though caravans sometimes carry it. Ore can be brought to the processing plant and refined, located in the downtown section.

Instead of using the chunk of ore in combat, the player character can have the ore refined in Broken Hills by paying a ghoul $1000 for 500 XP. The player can then wait 24 hours and sell the refined ore back to the refinery. If choosing the option that gives the least money, the player receives 1250 XP. 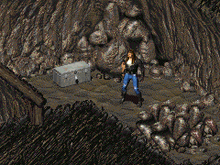 Check this footlocker for uranium ore in the hidden section just beyond the entrance.
English Polski Русский Українська
社区内容除另有注明外，均在CC-BY-SA许可协议下提供。
Advertisement