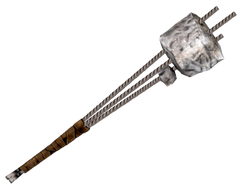 The rebar club is a weapon in Fallout: New Vegas.

This crude weapon is a piece of concrete with three pieces of rebar sticking out of it. In addition, the bottom of the three rebars appears to be wound together with a strip of brown leather or cloth to make a handle. The club requires a Strength of 9 and a Melee Weapons skill of 50 for it to be at its maximum potential.

It has a special Mauler attack that does regular damage in V.A.T.S. at the cost of 8 more action points, but has a chance to knock down enemies (requires a Melee Weapons skill of 50).

It is possible to execute Mauler outside of V.A.T.S. (without the required Melee Weapons skill of 50 to perform the move) by initiating a power attack (hold attack button) while moving forward.

The rebar club can successfully strike about 1245 times from full condition before breaking.