Metal armor is simply any kind of armor manufactured from metal scrap and ancient relics.

While power armor is technically also made mostly of metal, it is more advanced in its characteristics and as such, is not counted as "metal armor".

A basic suit of metal armor made of crudely polished metal plates.

An improvement over the previous one. Polished metal plates, finely crafted into a suit of armor.

A craft metal armor created from a variety of scrap pieces put on a black leather armor. The helmet looks like a white closedfaced, armor-plated motorcycle helmet.

This heavy armor shields against Gamma Radiation through the use of a lead lining. It has the same appearance as the black metal armor.

A greatly improved black metal armor with extra layers of metal added in several places. The helmet looks like a white closedfaced, armor-plated motorcycle helmet with an extra metal plate added to the front and two metal horns.

A metal armor version designed after the Great War by the Midwestern Brotherhood of Steel. Unlike other conventional metal armor, it has no spikes on the shoulder, bears the symbol of the Brotherhood on the right shoulder and is created from crudely polished metal.

An improved version of the previous one also designed by the Midwestern Brotherhood of Steel. Like its earlier version, it also has no spikes on his shoulder, a symbol of the Brotherhood in the left pectoral and created with several layers of fine polished metal for better protection.

Unlike the basic metal armor it strongly resembles, this armor is an actual pre-War military design, constructed from plans left behind by Nikola Tesla, confiscated by the US government after his death. It is designed to protect the wearer against energy attacks.

This version was likely designed after the Great War by the Midwestern Brotherhood of Steel, based on the pre-War model. The main difference is that its Tesla Attraction Coils are not in the form of protruding rods, like in the earlier variant.

A special suit of metal armor which covers the entire body like a power armor. There are two Tesla coils on the shoulders that disperse a large percentage of directed energy attacks.

An ancient Japanese armor worn by Toshiro Kago, a samurai abducted by aliens to Zeta.

Crude armor that uses straps of leather and metal bands to form a sparse but effective covering for super mutants.

A greatly improved black metal armor with extra layers of metal in several places with the added benefit of increased对火焰、毒素和辐射的抗性. 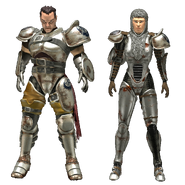