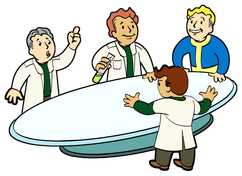 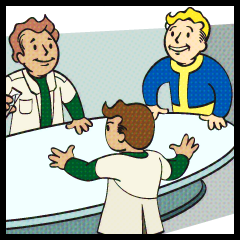 Mankind - Redefined is an Institute main quest and achievement/trophy in Fallout 4.

Meet Father on the rooftop after The Battle of Bunker Hill. He will request for the Sole Survivor to attend the next Directorate meeting. There, Father will make it public knowledge that he is dying from an aggressive form of cancer, and that he will be appointing the Sole Survivor as his successor upon death.

Finishing this quest automatically begins the next quest Mass Fusion.

The Directorate meeting may never start no matter what you do. All the department leads will be sitting at the table waiting for Father's announcement, but he will only ever tell you he has something important to say before he can talk to you in private. This could be related to recruiting Doctor Li for the Brotherhood of Steel at some point before the meeting. PC players can use console commands to advance the quest to the next stage.[已验证]