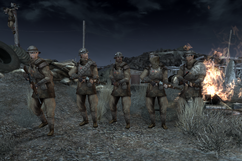 “I need someone to talk to a few of the officers and help them resolve some of the problems around here.”— Major Polatli

Restoring Hope is a side quest in Fallout: New Vegas.

Travel to the Camp Forlorn Hope command center and speak to Major Polatli and ask what can be done to help around the camp. He says that a lot of things can be done and then tasks the Courier with speaking to Mayes in the quartermaster's tent.

Mayes will send the Courier to retrieve a supply shipment that didn't get delivered to the camp. He directs them to Lieutenant Haggerty at HELIOS One to get more information on the shipment. Haggerty will reveal that the missing shipment has a GPS in it, so it can be located on the Pip-Boy's map. The location is northeast of the Southern Nevada Wind Farm, which is west of Camp Forlorn Hope. From the wind farm, go northeast until reaching a short cliff that drops into a small valley. Continuing to look northeast, one should be able to see a few dead NCR soldiers, along with a storage crate that contains the supplies needed several yards away by another small cliff. Taking the supplies triggers an ambush by 3-4 Legion soldiers.

After recovering the shipment, return to Camp Forlorn Hope and return the shipment to Mayes, then consult with Polatli. He sends the Courier to the camp's medical center and asks them to assist Dr. Richards. Speak to Richards and he will give the Courier a few tasks. First, he says that he would appreciate a hand in treating some of the injured soldiers. There is an option to not assist in this task. There are no negative consequences for choosing this option. Examine each of the three patients in the medical center and treat them accordingly:

Everything needed for the non-Medicine skill based solutions (except a super stimpak and two of the three Med-X) is inside the tent itself and the Courier will not be penalized for taking anything within it until they have finished with Richards. Regardless of this, a minimum Medicine skill of 25 is still required to successfully treat all the patients. If the Courier's Medicine skill is lower than 25, they will botch the treatment (rather humorously) even if they have collected all the required items. This will result in Richards throwing the player character out of the medical center and will net some NCR infamy. However, the quest will still continue as normal, with Polatli acknowledging that he likely sent the wrong man for the job.

After treating all of the soldiers, return to Richards and let him know. From there, return to Polatli and tell him the soldiers have been treated. He then sends the Courier to rendezvous with Cooper between the camp and Nelson.

Meet with Cooper and his squad and assault Nelson. The Courier will decide whether to attack from the cliff at the east (distance, good for sniping) or from the north (close quarters.) Cooper's squad will vary depending on the player character's success in completing the various side quests and unmarked quests in Forlorn Hope. If every quest was completed in the best possible manner, causing a high morale boost for Camp Forlorn Hope, Cooper will be assisted by Veteran Rangers with sniper rifles. Alternatively, lower ranks of morale will respectively result in Rangers with standard weapons, in the form of a 2 or 4-man trooper squad. There is a cliff nearby if the plan of attack includes sniping. Otherwise, storm Nelson and kill the legionaries in the town. Head to the northeast barracks and kill Dead Sea. He will have a few legionaries with him. After this, return to Camp Forlorn Hope and tell Polatli of the victory. This will complete the quest.

This quest is in direct opposition to We Are Legion. Finishing either will always cause the other to fail. For example, this quest requires the death of Dead Sea who gives (and closes) We Are Legion and vice-versa with Major Polatli.

Camp morale will determine how many and how strong reinforcements are during the NCR assault on Camp Nelson. There are various local quests to be completed, and the player character's success in completing them will determine how much morale is raised.

Doing the best quest paths possible will yield a total of 9 points.

The name of this quest is a reference to Operation: Restore Hope, a U.S. initiative to create a protected environment for conducting humanitarian operations in the southern half of Somalia in 1992-1993.