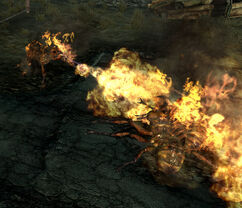 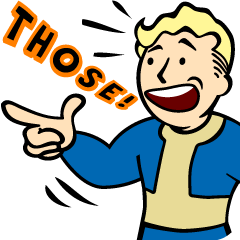 “Those... THINGS. They keep coming. They scare me. Make it stop!”— Bryan Wilks

Those! is a side quest in Fallout 3. It is also a Xbox 360/PC achievement and PlayStation 3 trophy.

A small boy named Bryan Wilks will approach the Lone Wanderer as they come into the vicinity of Grayditch; this includes Super-Duper Mart or sewer waystation, but can be as far as Wilhelm's Wharf.

He will then ask the player character to help him find his father, Fred Wilks, who seems to be trapped in the town infested with fire ants.

During the first two stages of the mission, Bryan will be hiding in the Pulowski Preservation shelter near the diner.

Bryan Wilks will approach the Lone Wanderer in the area outside Grayditch, where he tells them that he, his father, and the other dwellers were attacked by fire ants. He then asks the player character to look for his father in the town. The father's body can be later found in his house by the shack, killed by the fire ants. The player character can loot a Chinese assault rifle and some ammunition off the shelf in the house and the shack's key from the body of Bryan's father. In the shack, the player can find Doctor Lesko's equipment and terminal. Read the notes on the terminal to receive the Marigold station location and the option to proceed there to locate the source of the fire ants. Also, with a mildly challenging Speech check or the Child at Heart perk, the Lone Wanderer can convince Bryan to give them the key to a dumpster behind the diner with some random loot.

Find the source of the fire ants

While searching the Marigold metro station for the cause of the fire ant infestation, the player character instead finds Doctor Lesko working in a makeshift laboratory. He explains the origin of the fire ants, particularly their ability to spit fire. The Lone Wanderer can choose to help him reverse the effect or deal with the giant ant queen themself.

When speaking with Doctor Lesko, if the player character asks for a "serious incentive," he will offer his old lab coat along with bonus perks. Lesko's lab coat provides +20 Radiation Resistance and +10 Science.

The player character will find the fire ant queen in the queen ant's hatchery, beyond Dr. Lesko's lab. It is guarded by numerous fire ant nest guardians.

Find a place for Bryan Wilks to stay

First, talk to Bryan and tell him about his father's fate and the fire ants. He is located in the Pulowski Preservation shelter to the right of the diner in Grayditch. The player character is then given the option of helping him find a place to live. Bryan will tell the Lone Wanderer that a cousin of his lives in Rivet City. He is talking about Vera Weatherly, owner of the Weatherly Hotel. The player character only needs to find her and mention that Bryan needs a place to live and she'll happily agree to take him in. One is awarded considerable positive Karma for choosing this option. With the arrangement made, simply return to Grayditch and tell Bryan that he can move in with his aunt; he will agree to move out there, and the quest will end. When the player returns to Rivet City, Bryan will be there.

It is also possible to convince the Mayor of Little Lamplight to let him stay there, either with a speech check or via the Child at Heart perk. Be forewarned that discussing this option with the Mayor will prevent the dialogue option for Bryan's relocation from appearing with Vera Weatherly, closing off that path even if Bryan has not been told of his potential new home. Since this is not as good an arrangement for Bryan, no Karma will be awarded either way.

Alternatively, the player character can go to Paradise Falls. Talk to Eulogy Jones, and tell him they have a child for sale. He will offer 100 caps initially, but one can receive 300 caps if the player character passes a speech check. The Lone Wanderer will receive a considerable amount of negative Karma for this despicable act, and Eulogy will give them the agreed-upon number of caps and a collar to put on the hapless youngster. The player character will then trick Bryan into putting on the collar, and can explain that it will guide him home. Again, the quest will be completed and experience points will be given. Bryan will not be seen again, even though Three Dog will mention that he is at Paradise Falls.

The player character can also tell Bryan that they are unwilling to find him a place to live (or never offer to in the first place), which will end the quest immediately. Bryan will move back into his old house and live in Grayditch by himself. No Karma will be gained or lost. However, this option is irreversible, even if the player has a change of heart later. For example, even if the player character encounters Vera Weatherly later in the game, the dialogue option for getting her to take Bryan in will not even appear.

As long as the player character does not sell him to the slavers, they will get the 300+ experience points (XP is still rewardable for doing this on the 360 and the PS3).

Bryan usually finds the player character, most often on their first trip to Super-Duper Mart. If he does not, or if he approaches the player while they are in combat and gets scared off, here are the other places they may find him: