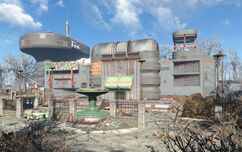 Med-Tek Research is a location in the Commonwealth in 2287.

Med-Tek was a pre-War medical and pharmaceutical company. In this facility, research was done on their latest product, Prevent, which was completed shortly before the Great War. If their predicted sales are anything to go by, Prevent was to be their latest in a long line of wonder drugs.

Subjects used in Med-Tek's research may not have participated in the experiments voluntarily. Cell blocks were built into the lower facility to house test subjects and a number of remains have handcuffs and duct tape in close proximity. Research in this facility included infectious diseases, one of which targeted children and teenagers. After the Great War, the facility entered a permanent lockdown, and many of the trapped inhabitants were turned into ghouls.[1]

There are many ghouls hidden underneath vehicles and inside the parking garage next to the building that may wake up after unsuppressed gunshots.

The facility has three accessible floors and contains feral ghouls. An airlock on the first floor can only be opened as part of MacCready's companion quest Long Road Ahead, and grants access to the sublevel of the building. The second and third floor can always be accessed, but contain very little of interest. The executive terminal on the third floor is part of the previously mentioned companion quest for MacCready.

Med-Tek Research appears only in Fallout 4.