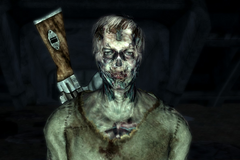 Masters without his helmet

“Live it up while it lasts.”

Michael Masters is a ghoul residing in Warrington station in the year 2277.

Michael Masters was an esteemed electronic and biological engineer before the bombs dropped. He does not remember much of the first years after D.C. was destroyed, but he does remember his human life and resents his ghoulish nature (though he does appreciate the gift of longevity). He was extremely intelligent and jovial in his old life, but living as a ghoul has made him very pessimistic and angry at the world. He sees his ghoulification a karmic curse, because he was attempting to keep America at the forefront of human mutation experiments, breeding super-warriors after being inspired by the works of the German, Russian and Chinese doctors.[1]

He also mentions that he used to vacation in Tenpenny Tower.

Tenpenny Tower: Upon first meeting Michael, he will try to make the Lone Wanderer go back the way they came, eventually leading them to Roy Phillips if they insist.

Michael Masters is one of the few ghouls who still have human eye color. The ghoulified Moira Brown resulting from nuclear destruction of Megaton is the only other known example of this.

Michael Masters appears only in Fallout 3.