Fallout: Brotherhood of Steel (commonly truncated as Fallout: BOS) is an action role-playing game developed and produced by Interplay Entertainment for the PlayStation 2 and Xbox game consoles.

The game takes place in Carbon, Texas, in the year 2208. The player character chooses to control one of three initial characters: Cain, Cyrus, or Nadia, all of whom have pledged their services to the Brotherhood of Steel and have become initiates.

Brotherhood members have gone missing in Carbon, and the chosen Initiate is tasked with searching for the paladins, starting with the nearby town. Armed thugs loiter in town and are trying their best to make kindling of the furniture in the bar. The bartender is grateful if the Initiate breaks a few of them in return, and steers the Initiate in the direction of the shifty mayor of this lawless town.

The mayor might be due some choice words from the electorate for the state of his town; one, in particular, will give the player character a discount as a reward for telling off the mayor. Even this outburst won't make the mayor reveal the location of the missing paladins. He insists the player character clear out an infestation of radscorpions in the nearby warehouse.

The Initiate can collect the scorpion tails and whatever contents of the warehouse that aren't nailed down, which the barkeep is interested in buying. When all the giant, radioactive, and the more common mutated scorpions are all rendered lifeless, the Initiate returns to the mayor. The mayor reveals the missing paladins headed off in the direction of a massive crater outside of town.

Following the trail to the bottom, the Initiate finds that the mayor isn't one of those non-player characters that just stand around all day; not only that, but he has more explosives on him than anyone really ought to be able to carry, and seems determined to unload as much of it as possible in the Initiate's not-so-general vicinity. The end result of this for the mayor is a nice dirt nap, appropriately, beneath the rock slide his explosives caused. The player character returns to the town.

The raiders have given up loitering in favor of looting. Many of the citizens of the town have fled; one who couldn't make it to their refuge in the recently cleared warehouse requests the Initiate's aid in saving them. But first, there are a total of 37 citizens scattered throughout the town areas. Should they be saved by the Initiate, the Wasteland Stranger will be very grateful indeed, to the tune of a Red Ryder LE BB gun. The bandits inside, and their leader, are doing what they do best; getting in the way. The Initiate finds ways to make them less obstructive.

After fighting in the warehouse, the Initiate manages to revive an old generator and takes an elevator that overlooks the entrance to the Secret Vault. Here, two super mutants activate turrets, which the Initiate must destroy. After all that, the player character uses the key card to open the door of the armored shelter and enter.

During a battle with Attis, the mutant general, the player character is knocked unconscious and left for dead. With help from the human residents of the vault, the Initiate is revived and enters the ruins of the vault in a search of Attis. When the two meet again, Attis has mutated into a blob. The player character fights through the blob in order to gain access to a computer terminal that can start the decontamination of the vault. The Initiate then runs to a monorail car, narrowly escaping the now self-destructing vault.

The action in Fallout: Brotherhood of Steel takes place in only one zone per chapter. A zone is composed of many locations and a player character can return to previously visited locations when they want until they entered into a new chapter and a new zone (Carbon, Los or Secret Vault). They can also sometimes not be able to visit a new location until the storyline advances. There are 50 separate maps of varying size in the game, the primary locations include:

In Fallout: Brotherhood of Steel, "skills" have the same function as perks in other Fallout games.

Cain:
Cain is a ghoul who decided to join the Brotherhood after super mutants destroyed his hometown. Of medium build, he is able to use heavy weapons and dual weapons, but not maneuver well with the former and cannot run while using the latter.

Cyrus:
Cyrus was born in a tribal farming village, but he started roaming the wastes after his village was destroyed by super mutants. He later decided to join the Brotherhood as a soldier. Of heavy build, able to use and maneuver well with heavy weapons. He cannot equip dual weapons and cannot run while firing any weapon.

Nadia:
Nadia spent her childhood as an orphan living on the streets. Although she adapted to life there, she decided to join the Brotherhood when she witnessed several of its members engaging in an act of philanthropy. Of light build, she is able to equip dual weapons. She cannot use heavy weapons. The weapons she can equip, she can fire while running.

Patty:
Has the same access to and restrictions on weapons as Nadia. She has +10 to her Base Armor value, and bonuses to the following skills: +20% bonus to Bargaining, +80% to Gun Damage, +25% to Desert Soldier and +25% to Future Woman.

Rhombus:
Unlike the first four characters, Rhombus has no restrictions or bonuses to weapon class in regards to equipping or movement. Rhombus has a Base Armor bonus of +30. He has a +100% bonus to Melee Damage, and +50% bonuses to Explosive Damage and the skills Heavy Hitter and Wastelander.[2]

Vault Dweller:
This powerful player character can be selected for use only in a new game, and as with Rhombus, has no weapon class restrictions or bonuses. He has a stacking unarmored Base Armor value of 20, and +100% bonuses to Melee Damage, Gun Damage and Explosive Damage. Additionally, +20% bonuses to the Slayer and Fortune Finder skills, and +100% to the Heavy Hitter and Wastelander skills.

Patty, Rhombus and the Vault Dweller can be encountered while they are not being controlled as the player character.

There are 56 weapons in total:

These weapon types overlap; e.g. a home-made laser pistol is a homemade weapon, an energy weapon and a gun type. The highest damage weapon, other than the mini nuke grenade, is the Shredder, a Big Gun with 480-606 damage.

To create the game, Interplay used the "Snowblind" game engine also used in the console games Dark Alliance and the online-capable PS2 game Champions of Norrath.[3][4] 480p and Dolby digital are supported.[4]

All voice acting citations from the Internet Movie Database.[5]

Fallout: Brotherhood of Steel is the only Fallout game as of its release date to not feature voice-acting by Ron Perlman, who recorded for the narrator's speeches and the line, "War...war never changes." The narrator for this game is Tony Jay (the Lieutenant from Fallout).

The game features different style of music compared to other Fallout games, with some ambient music from the 1940s and 1950s, Fallout style background music and music by modern bands, such as Slipknot, Killswitch Engage, Celldweller, Meshuggah, Skinlab and musician Devin Townsend. For modern bands, however, the game diffuses, playing only the instrumental and this music is only played during boss fights.

There are a number of inconsistencies in Fallout lore including:

“I don't know if I'll ever feel fully clean again. I so wanted it to be good, because it had been so very long since a good Fallout game. Nowadays, I keep the disc around solely to focus all of my hatred and scorn into it. But I try not to actually touch it, lest its fundamental badness rub off on me."”— Fred Zeleny, Meet the Fallout 3 devs interview 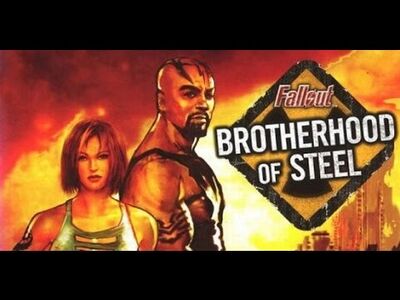