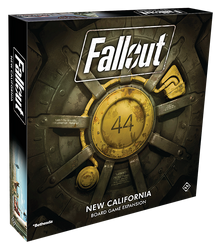 Fallout: New California is an expansion for Fallout: The Board Game, developed by Fantasy Flight Games. It was released in October 2018.

The New California expansion brings new quests, companions, vaults, and items to Fallout: The Board Game, letting you venture out into the wasteland as five new characters. While there, you can wander across twelve new map tiles that expand the scenarios found in the original game or head into sunny New California and visit some of the most memorable locations from throughout the Fallout series.

The game is described as, "humankind rising from the ashes of the old world into a weird world full of danger and—if you’re brave or foolish enough—opportunity. The New California expansion provides plenty of opportunity to make a name for yourself across its two new scenarios. The first opens as a secret power grows in the background threatening the grip the Brotherhood of Steel paladins have on the wasteland here. Could this new presence be related to the rumors of mutants and experiments gone mad? Before pledging allegiance to either side, you need to know more about the Brotherhood and the mysterious Unity."[1]

另見： Fallout: The Board Game items