Rad chicken are creatures found on the Island in the Fallout 4 add-on Far Harbor.

Centuries of exposure to the Island's high radiation levels have taken their toll on the local chicken population. The bird's wings, as well as their plumage, have atrophied almost to the point of nonexistent; leaving them naked and unable to fly. Glowing yellow and dark brown spots and weblike gashes in the skin mar most of this creature's body. Unlike many other animal species that live in the post-apocalyptic wasteland, rad chicken have not grown to monstrous sizes. In fact, they actually appear to be slightly smaller than their pre-War ancestors. Apart from these differences, rad chicken retains most of its original appearance.

Rad chicken are completely docile and pose no threat whatsoever. They also are fairly cowardly and will often flee as soon as combat breaks out in their vicinity. The small birds can, therefore, be ignored in any given situation unless one is out to hunt them for their meat. All of them crow multiple times at sunrise. Once encountered, they will pop up as a red dot like all other enemies, and in V.A.T.S., they are considered hostile. 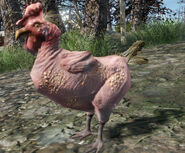 Rad chicken on the Island