“And how such a large creature can even be possible by natural evolution, or even radiation induced mutation is beyond me.”— Seth in Fallout

辐射蝎are large, mutated scorpions commonly found in and around abandoned structures.牠們是由北美帝王蝎变异而来，[1][2]这种蝎子在戰前美国分布很广。[3]核辐射将牠们变得更大、更快、更毒。现在牠们的毒腺变得非常发达，因此能够用来配制解毒剂。Common radscorpions share a similar appearance, with one variant type. However, many sub-populations of unique radscorpions exist.

These are the most common variety of radscorpion. 牠们全身的外壳呈现出一种诡异的蓝青色。These venomous predators seem to possess different speeds, some taking their time and others bolting at top speed. Their size ranges from that of a large dog to that of small livestock. Variants in Chicago have been seen with their stingers sometimes having a green, glowing radioactive tip. 牠们常用那对可怕的螯爪，那条带毒的尾巴反而少用。

This is a unique, genetically engineered intelligent radscorpion. It has been so extensively modified it now possesses the ability to speak, and can play chess. You can challenge it in Perception, Agility and Intelligence.

A much larger radscorpion with a more potent venom. These terrifying creatures can reach incredible sizes from livestock to a Corvega. The giant radscorpion is often encountered in pairs, it's not uncommon to see one turn from the player and back off, only to be joined by another and charge in again.

The albino radscorpion is a variation of radscorpion encountered with the Broken Steel add-on to Fallout 3. They are about the same size as giant radscorpions but lack carapace pigment. They are one of the deadliest creatures in the Capital Wasteland, and can sometimes be found fighting deathclaws or sentry bots. In Fallout 4, their main territory is the Commonwealth where they are rare to find (occurrence increases slightly with higher difficulty - (Very hard or Survival mode). They have similar strength and abilities to those seen in the Capital Wasteland and are only surpassed by the emperor radscorpion.

These creatures are likely juveniles or just much smaller examples of radscorpion, as they are encountered both in company with larger varieties as well as by themselves. The strength of their attacks and the potency of their venom are proportional to their size. Their size ranges from that of a brimmed hat to a medium-sized dog.

A very rare and special kind of radscorpion, the queen is the largest variant of radscorpion in the Mojave and also the strongest. 莫哈维一共有两只女王蝎，一只在蝎子洞里，一只在探照灯消防局里。

除了体型和颜色外，木蝎的攻击方式也有所不同。不像牠的远亲们看到目标就直冲过来，牠们通常会采用迂回包抄的方式，从目标的侧翼或者后方发动攻击。如果发现目标的时候已经距离很近，牠们甚至会跳到目标身边进行突袭。If encountered in numbers, they frequently try to surround their intended target.

相較牠的远亲们木蝎属于比较脆弱的生物。但牠们的毒素还是会给你带来一些麻烦，causing more damage over time, as well as blurred vision.

Among bark scorpions, these are the larger and more aggressive individuals. They are generally found in the same areas as their smaller counterparts, and can be difficult to distinguish from regular bark scorpions.

These types of radscorpions live in highly radioactive areas in Texas. Two known locations of this variant are found is the Carbon crater near the town of Carbon and the Secret Vault ruins (both areas have suffered a nuclear bomb and had many radioactive elements before). Similar to normal radscorpions, glowing radscorpions have been irradiated far past mutation to the point where they visibly glow even in bright sunlight (similar in the process to glowing one) and get a green aura and a light whitish-brown color. They are a bit more aggressive than the normal variety. Both their pincer claw attacks and stinger strikes subject the victim to high radiation exposure. Once dead, they release a highly radioactive green smoke for three seconds. These variants can be found once again in the Commonwealth with a medium-rare occurrence of respawning to the player's location. They have similar abilities and strength to those found at "Carbon Crater" with the exception that they can no longer release radiation when killed or release it through their stingers. They can only emit low-level radiation when engaging in close battle and appear frequently if the difficulty is set high (Very hard and above).

Spitting radscorpions are native to the Carbon crater near the town of Carbon, as well as the Secret Vault ruins. Much like the glowing radscorpions, they are the result of prolonged exposure to radiation. They have developed the ability to spit radioactive venom at great range. Their claws are severely underdeveloped and used generally for protecting the spitting radscorpion's head but they can still be used as a weapon if necessary. Spitting radscorpions are yellowish green in color with a bright red coloring on their back and legs.

Even larger giant radscorpion are rumored to live near the irradiated Carbon crater in Texas. High radiation levels and special environment in the crater has caused them to mutate to enormous size and develop traits uncommon to their kind. They are the biggest of all radscorpions, approximate to a large tractor-trailer in size. Their massive claws are used as both weapons and shields with extraordinary range and can block bullets. It has a big, reddish eye sits in the center of their head and possesses an extremely robust exoskeleton. Strong and fast, they have only one known weak spot: the arms supporting their giant claws. If these limbs can be damaged or destroyed, they are left to rely on their deadly stinger alone. 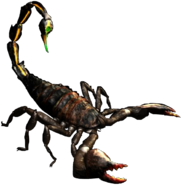 Radscorpion in Fallout: Brotherhood of Steel