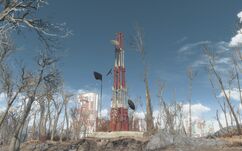 This location consists of a relay tower surrounded by a chain-link fence. A terminal, also inside this fence, can be used to extend the satellite dishes, after which three radio broadcasts become available. The tower is commonly inhabited by mole rats.