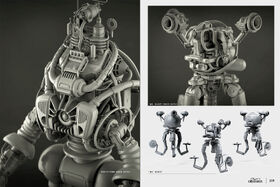 Robots and computers are artificial entities encountered in the Commonwealth and surrounding areas. 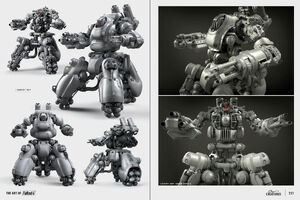 Most robot types have a chance to spawn as a Legendary variant, as well as tiered named variants leading up to the Legendary robot. A Legendary will almost always drop weapons or armor with unique modifiers (displayed with a star next to the names). For more information on these modifications, see Legendary effects.

In combat, Legendary enemies are very powerful as they are stronger than non-Legendary creatures of the same type (see below for specific differences), and they are often among the highest-leveled variants a player character is capable of running into at their particular level.

Legendary enemies will "mutate" once they lose half their health, in which they instantly heal to full health and possibly grow stronger. To avoid mutations, one must use a powerful kill shot such as a critical or explosion before the enemy dips below half health. In the case of legendary sentry bots, after death instead of one explosion, two occur.

The chance of a creature spawning as Legendary varies based on difficulty and the player character's level. The default difficulty is Normal.

There are 77 robots and computers in the Fallout 4 base game.