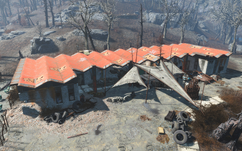 The Roadside Pines motel is a location in the Commonwealth in 2287.

This location is a small raider camp, consisting of one building with minimal loot. To the south there is a swimming pool with a dead settler on one end and a tripwire in the northwest corner. In the reception room there is a floor safe behind the counter.

The Roadside Pines motel only appears in Fallout 4.