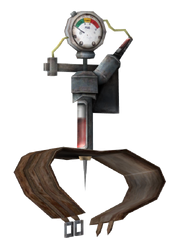 The super stimpak is a more advanced version of the regular stimpak found in Fallout: New Vegas. While it heals more severe wounds, it also has unpleasant side effects. The super version comes in a hypodermic needle, but with an additional vial containing more powerful drugs than the basic model and a leather belt to strap the needle to the injured limb.

In addition to healing, the game also adds the debuff "stimpak sickness" which happens after using a super stimpak. The effects are -1 to Strength and -1 to Agility and its duration lasts for 3–4 minutes. It cannot be cured by Fixer but can be fixed with Buffout. It is very problematic, especially in combat, as it may cause the player character to become overencumbered, and therefore slower in a critical situation.

¹ Craftable without a workbench via a dialogue option with Veronica, or with ED-E with the Lonesome Road add-on installed.