“You're lucky old men learn patience. But keep pushing your luck and I'll teach you a thing or two.”

Herbert "Daring" Dashwood is a retired adventurer residing in Tenpenny Tower in 2277.

Herbert Dashwood, born in 2207, spent his younger days as a traveler and adventurer, and amassed a big enough fortune to buy his way into Tenpenny Tower for a comfortable retirement. He first met Argyle in 2241, when the adventurer stole his girlfriend. However, despite the misunderstanding, they became good friends. Somewhere in their adventures together he became Dashwood's manservant.[1][2][3][4]

Adventures in the Wasteland

The two visited many places during their exploration of the wasteland. In the summer of 2248, Dashwood and Argyle were given permission to take shelter inside Rockopolis by King Crag. But when Dashwood had an "incident" with Crag's daughter, the two were exiled.[5] They often went to the Blue Destiny Brothel, which Dashwood renowned as the "best whorehouse in the Capital Wasteland". He may have had relationship beyond the professional with its madam, Destiny Chao;[6] although as Dashwood notes, the place was shut down in 2249, when most of its occupants died of a cholera outbreak.[7] He also made frequent visits to Megaton[8] and Underworld, where in 2251 he was named an "Honorary Ghoul."[9]

According to the Galaxy News Radio drama, Argyle and Dashwood's final adventure together started when he and Dashwood were captured by the Paradise Falls slavers. Managing to escape their slave collars, Dashwood insisted on trying to rescue the mysterious woman who was locked in "The Box." They subdued the guard and unlocked the Pulowski Preservation shelter to find that it was empty. Another guard found them and at gunpoint demanded they surrender, only for the mystery woman to appear behind him with a metal object. She hit the guard from behind and introduced herself as Penelope Chase, fortune hunter, claiming that she freed herself when she noticed their predicament. Argyle was hesitant to trust her, but Dashwood was enthralled and, after a brief introduction, the trio made their escape.[10]

After dispatching the last of the slavers chasing them, they continued forward while conversing further. In the process of questioning Miss Chase, they were again held up - this time by super mutants. While the other two were being defiant, Argyle snuck around the mutants and placed live grenades on their persons. After the trio took cover, when the literal smoke cleared, Argyle fondly reminisced on his times with the "Shady Sands Shuffle" and asked about the other two's well-being. Miss Chase was impressed with Argyle's skills and Dashwood commented on how he did not know how he got by without Argyle. Argyle reminded him that he did not get by, with Dashwood immediately trying to change the subject. They then heard the sound of a child screaming in the nearby ruins, rushing off to investigate the commotion.[11]

Some time later, while the trio were being chased by super mutants, Miss Chase noticed that they were near the hills where the hidden village of Rockopolis was located. When she lamented not knowing where it was, Dashwood immediately cut her off, and in an attempt to impress her, started bragging about how he and Argyle were old friends of the settlement, further revealing that they knew the secret knock and more. Argyle showed his displeasure in so readily trusting the woman with such privileged information. Dashwood cut off Argyle, assuring him that Miss Chase would not violate the secrets of Rockopolis, and furthermore, they needed a place to hide from the mutants.[12]

Moving through the boulder entrance with the secret knock, they entered Rockopolis, after which Argyle interrupted a flirtatious Dashwood and Miss Chase. Argyle again pointed out that they were in Rockopolis, one of the safest places in the wasteland, and they had just given its secrets to a stranger. Dashwood attempted to dissuade his companion's outburst to Miss Chase, only for her to reveal herself. Pulling a gun on the pair, she claimed that her slaver associates would be right behind them. They then realized who she really was - not Penelope Chase, "fortune hunter," but instead the "Black Widow," leader of the slavers. She boasted about how the slavers could never have found the denizens of Rockopolis without Argyle and Dashwood.[12] As she was demanding no trouble from Argyle, he used his kung fu skills, using a move he called the "Eagle Claw" to rip out her heart, killing her instantly.[13]

While Argyle made a pun and Dashwood congratulated him, King Crag arrived at the scene. Crag was both despondent at seeing Dashwood and shocked at the dead woman in front of them. When Dashwood informed him of the impending slaver attack, Crag became so furious that he ordered his people to kill the duo. They immediately took off running into the cave system and came to a cliff. Dashwood went first and almost fell, barely clinging on as Argyle rushed to help.[13]

How this ended is unclear, as Argyle's corpse lies near the entrance to Rockopolis in 2277. The village was taken by the slavers, who captured as many as they could and sold them north to the Pitt.[14] With Penelope Chase dead, Harmon Jurley would take over as leader of the Slavers for the next couple decades.[15][16]

Dashwood last saw Argyle in Rockopolis, decades prior to 2277, and never lost hope of seeing him again, believing that Argyle would outlive him by at least one hundred years.[1][2][5] This, however, was not to be, as he died there on their last adventure together.[3][17]

After years of adventuring, Dashwood amassed a large enough fortune to buy his way into Tenpenny Tower for a comfortable retirement. Herbert Dashwood is friendly, down-to-earth and possesses a self-ingratiating sense of humor. If asked, he'll gladly talk about the things he's done, places he's been and creatures he's encountered. He occasionally sneaks into the rooms of other people as a way of keeping himself amused and keeping his adventuring skills honed in case he ever needs to come out of retirement. Both his and Argly'e legacy lives on, preserved by Dashwood in the Galaxy News Radio play The Adventures of Herbert 'Daring' Dashwood and his Ghoul Manservant Argyle. Produced by Three Dog a few years prior to 2277, it was created in the style of the radio plays from before the Great War. Unlike the pre-War plays, these stories are all true, according to Dashwood.[18] They are often played and became a favorite program across the Capital Wasteland.[4]

Herbert will walk around Tenpenny Tower and occasionally play a joke on Cheng by messing with his terminal. He occasionally visits the Federalist Lounge on the first floor, and can otherwise be found in his room where he sits beside his radio.

Herbert Dashwood appears only in Fallout 3.

Herbert may not carry the key to his safe on him for pickpocketing. Instead he will carry a generic key called "Tenpenny Tower Resident's Key," which will not work on his safe. Thus, if the player character does not speak to him about Argyle before killing Roy Phillips, they will be unable to obtain the key and access Dashwood's safe. [已验证]

Herbert Dashwood daring to share his bed with Susan Lancaster 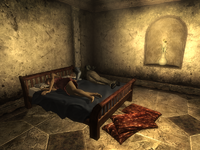