In V.A.T.S., you do an additional 15% damage when targeting the torso.

•  Choose to aim at the torso of an enemy without an increase in difficulty when making a ranged attack.
•  May also re-roll a single d20 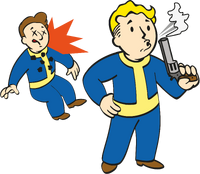 Center of Mass, or Center Mass, is a perk in Fallout: New Vegas and Fallout 2d20.

“You don't fool around with fancy trick shots. Straight to the midsection and down they go. In V.A.T.S., you do an additional 15% damage with attacks targeting the torso.”— In-game description

When targeting the torso of an enemy in V.A.T.S., an additional 15% damage is dealt.

When performing a ranged attack, aiming at the torso (or equivalent, such as the main body of a Mister Handy) of an enemy does not increase difficulty to hit. Additionally, when aiming for the torso, a single d20 may be re-rolled when performing the test for the attack

In terms of weapons handling, center mass refers to the center of a person's chest or torso, which is the middle of the visible mass, making it the most likely place to score a hit. The center of mass is not only the largest target but also where important organs are, so it's generally seen as the priority target, lacking the difficulty and improbability of a shot to the head.