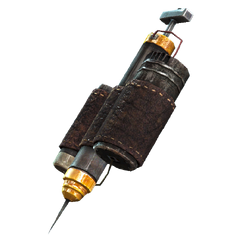 Psycho is a powerful drug created by the U.S. Army in an attempt to enhance the effectiveness of its infantry. Most details of the drug's development are unknown, including the specific techniques used in clinical trials and the degree of consent provided by military personnel who participated in the testing.

Although the US Army no longer exists in the Fallout 4 era, Psycho still sees prolific use throughout the wasteland. This is likely due to its relatively easy manufacturing process, a mostly synthetic ingredient-oriented process that has multiple parts that can be replaced with the post-War mutant plant hubflower. Raiders commonly produce Psycho due to its abilities to stimulate aggression, ignore pain, and its intoxicating effects. This is not to say that the drug doesn't see recreational use as well.

Psycho has the effect of giving damage resistance and a damage boost, essentially giving it the same capabilities as Slasher from Fallout: New Vegas. The withdrawal effects, if one gets addicted, makes them take more damage. Additionally Psycho appears to make the Sole Survivor more aggressive, yelling violent expressions after using the drug.

Upon using Psycho, the player character may let out a crazed roar or exclaim battle taunts like "Bring it!" or "Fucking kill!".